Google is literally hitting the road to promote the potential of the internet in Bangladesh. The company today launched ‘Google Bus Bangladesh’, an educational program aimed at teaching key digital skills to more than half a million students in the South Asian country.

There are some outlandish programs to help connect the world’s population — including Google’s balloons, SpaceX’s forthcoming satellites, and Facebook’s drones — but Google is going back to basics with this roadshow across the world’s eighth most populated country. 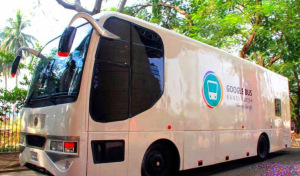 It plans to visit some 500 educational campuses across 35 locations over the next 12 months, bringing with it instructors who can teach students about important tools to help them make the most of the internet.

In addition to tutors, students involved in the project will be able to get hands-on with a number of internet-connected Android devices. Google tells us that the hardware will be entry-level devices from Symphony, like the $70 Xplorer W65i. There’s also a Google+ community for the project, where students can exchange ideas, and access more information.

“Bangladesh is a country on the move with a large pool of young citizens that’s leading the Internet charge. Equipped with the right training, the youth can be the cornerstone for creating a connected, digital Bangladesh,” said James McClure from the Google Asia Pacific team.

Living in Southeast Asia, I’ve witnessed first-hand how the internet can make big and also small-yet-impactful changes to people’s daily lives. Whether that’s helping connect them with friends, family or experts, giving them better access to information and news, or just providing a medium for entertainment — many people in emerging markets are simply just unaware of what’s possible. Throwing a smartphone or computer at them isn’t always the best approach, since the internet can be daunting, so a tutor-led approach is a great start.

With two-thirds of the world estimated to be offline, local initiatives like Google Bus Bangladesh offer inexperienced or first-time internet users an important opportunity to familiarize themselves with the basics and the possible benefits. It’s doubtless true that the more people who use the internet or carry mobile phones is good for Google’s business — but, even still, initiatives like this are resource and time-intensive, and Google deserves credit for getting out there and trying to make a difference.