Bangladesh becomes the 29th country in the world to commercially grow a genetically modified crop. Genetic modification of crops is one of the most controversial and polarizing issues in global agriculture. It is contested by environmental activists on concerns over food safety even as scientists research on transgenic crops to tackle drought, salinity and pest-related problems in agriculture.

“Cultivation of four varieties of Bt brinjal [eggplant] has been approved by the environment ministry and planting will start this month,” Director General of the Bangladesh Agricultural Research Institute Rafiqul Islam Mondal told The Wall Street Journal. 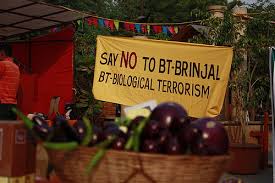 Scientists in India have also developed Bt eggplant but commercial cultivation isn’t permitted because of protests over its biosafety and concerns over economic viability.

“We have taken the Bt gene technology from India’s Mahyco company but all varieties have been developed by our institute,” Mr. Mondal said. U.S.-based crop science multinational Monsanto Co. MON +1.74%  has a 26% stake in Mahyco.

Mr. Mondal said cultivation will be done under strict monitoring, on a limited scale and the four varieties will be specific to four different regions.

December-January is the main planting season for eggplant in Bangladesh though it is also grown in the highlands over June and July.

Genetic modification of eggplant by introducing the “bacillus thuringiensis” gene will help tackle the menace of the fruit and shot borer, one of the most damaging pests for the crop, Mr. Mondal said. This pest has damaged between 25% and 70% of Bangladesh’s eggplant crop in the past, he added.

With the introduction of genetically modified eggplant, “marketable” yields could potentially be doubled in the next few years, Mr. Mondal said. Currently large volumes of damaged crop are rejected by consumers in the retail and wholesale market and have to be thrown away.

“We are doing trials of five more varieties of Bt brinjal and plan to apply for permission for commercial cultivation next year,” Mr. Mondal said.

Separately, Bangladesh is researching on genetically modified potatoes to tackle the serious disease called “late blight of potato,” but trials will take up to three years, he said.

India’s Mahyco is developing a series of genetically modified varieties of wheat and rice to boost crop yields by tackling drought, salinity and pests, the company’s chief technology officer, Usha Zehr, told The Wall Street Journal in a recent interview. She said the company has also submitted an application to the regulatory authority, seeking permission to undertake field trials for a herbicide-tolerant variety of genetically modified wheat.

However, a technical committee appointed by India’s Supreme Court in October 2012 had recommended a 10-year blanket ban on field trials of genetically engineered food crops, prompting criticism and opposition by many scientists.