The Government should allow garment exporters to invest 5 to 10 percent of their export value for opening showrooms and outlets in the UK, which has a huge market for Bangladeshi clothing brands, said chairman of the newly formed trade body UK Bangladesh Catalysts of Commerce and Industry Ltd (UKBCCI) Iqbal Ahmed.

Mr. Ahmed said this during a recent meeting of a 10-member delegation of UKBCCI with Federation of Bangladesh Chambers of Commerce and Industry (FBCCI) president Kazi Akram Uddin Ahmed at the FBCCI office in Dhaka, reports the Daily Star. 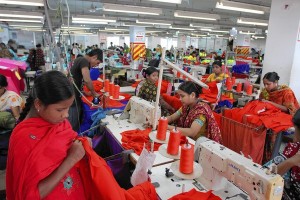 Government support to apparel manufacturers in opening showrooms in the UK would also enable country branding of garments made in Bangladesh, the UKBCCI chairman added.

During the meeting, Mr. Iqbal Ahmed also asked the FBCCI to urge the Government for rapid set up of the proposed special economic zone (SEZ) in the north-eastern Bangladeshi city of Sylhet, in order to facilitate more foreign investment in the country.

According to the UKBCCI chairman, a large number of Sylhet-based entrepreneurs live in the UK and establishing an SEZ in the city would help facilitate more investment from these entrepreneurs.

On his part, FBCCI president Kazi Akram Uddin Ahmed assured the UKBCCI members that he would be placing their demands with the Government, stating that non-resident Bangladeshi (NRB) investments in several sectors of the country are a good sign.

The newly formed UKBCCI aims at promoting and boosting two-way trade between Bangladesh and the UK, in various sectors, including the apparel sector.