Chris Pratt and Zoe Saldana-starrer ‘Guardians of Galaxy’ is set to release in India on August 8.   The film, based on Marvel Comics of the same name, is directed by James Gunn and produced by Kevin Feige. 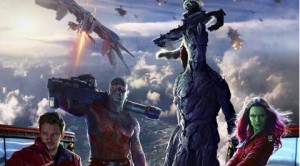 ‘Guardians of Galaxy’ revolves around the character of Peter Quill, played by Pratt, who forms an uneasy alliance with a group of extraterrestrial misfits on the run after stealing a coveted ring.

The film also stars Dave Bautista, Bradley Cooper featuring as the voice of Rocket, Lee Pace, Michael Rooker and Karen Gillan among others.

Actress Karen Gillan went bald for her character of ‘Nebula’ in the space adventure. The movie, distributed by Walt Disney Studios Motion Pictures, will open in US theatres on August 1.