Seven and a half months after the closure of the official rescue operation at Rana Plaza collapse site in May, human bones are coming out in numbers over the last few days, thanks to the curiosity of a few locals, particularly children, surviving workers and relatives of the missing workers who dared crossing the barbed enclosure put there at the end of the official rescue. 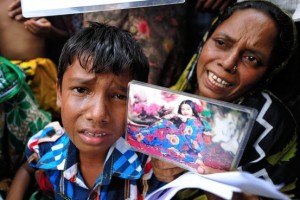 On Saturday, more than 100 pieces of human bones were recovered and handed over to the police by the locals, following four such consignments earlier this month.

“Bones are coming out almost with every scrap on the surface of debris. Skulls are coming out, jaws and little finger pieces. To me, it’s nothing else but a ‘baddhabhumi’ (slaughtering ground) or ‘ganakabar’ (mass graveyard),” Jiarul Islam, a worker of Phantom Apparels who survived the collapse, told UNB at the site on Saturday.

Jiarul along with his two brothers and two sisters-in-law used to work in the same factory. Four of the five in the family survived — Jiarul’s sister-in-law Sumi is still missing.

Anwar, a construction worker, was cementing the sidewall of a building that also fell down as the southern side of RanaPlaza collapsed over it. He was overhearing the discussion between this correspondent and Jiarul and suddenly intervened saying ‘we’re finding bones everyday’.

“You see, we’re working along the border of this spot. We don’t search for the bones. Actually, the bones come out incidentally as we move around amid the work,” he said.

Asked where was it, he replied: “I threw it into the ditch there (inside the collapse site).”

Rimon, a grade seven student of a local school, along with three-four friends were also present on the spot during the interview. They also began to speak out facts about the bone-finding, and, after a while, it appeared the place has already created a lot of curiosity among the children living nearby.

“I found two finger-parts yesterday. I also found a screw-driver,” he said.

As if to prove the facts about the bones, some locals began to remove the brick chips and scrap the sandy surface of the debris using only their hands. As soon as the search ensued, the pieces of bones were coming out. From about 11am to 11:40am, more than 100 bones came out from 8 different points on the spot.

The bones included 52 bones, including backbones, finger-bones, arm-bones, chest-bones, leg-bones, a jaw at a single point and a skull without the jaw quite in a distance. It must also be mentioned that the skull and the jaw didn’t match with each other to the eyes of the laymen.

The bones were later handed over by the locals to Savar police station’s assistant superintendent of police Kamruzzaman. His primary ‘seizure report’ mentioned about 100 bones from different points on the spot.

Savar police station’s officer-in-charge Mostafa Kamal told UNB that the police have been receiving human bones that the locals are recovering.

“We’ve received four consignments of such bones after the official rescue ended. I can’t exactly tell you the number of the pieces. We’ve sent those to the DMCH (DhakaMedicalCollegeHospital) for DNA tests,” he said.

Md Imdadul Islam, president of Rana Plaza Workers Union, an organisation founded by survived workers, said, “I’m frequently getting information about the bones found over the last month. I saw some of the bones, including skulls, too as some of the persons informed us about the recovery.”

“The locals and the workers of our organisation have handed the recovery to the police — I guess we handed over three such consignments to the police,” he said.

“Even though the official rescue was over few months back, I still believe a good number of dead bodies — may it be parts as small as a finger bone — are still left to be recovered from the collapse,” he stressed.

“As formers workers of RanaPlaza, we urge the government for initiating a special operation to rescue the bones. The former workers and locals will cooperate,” Imdadul added.

The Inter Services Public Relations (ISPR) Directorate in a statement on September 1 claimed 261 people who were inside RanaPlaza during the collapse remained untraced till then.

Bangladesh Army identified those 261 out of 329 people who are reportedly missing after the collapse, it said.

The army declared the end of the search, which as hugely participated by civilians, for on May 13 after the heroic effort, recovering 1,115 bodies from the collapse. 234 dead bodies retrieved from the site were buried at Jurain Graveyard.