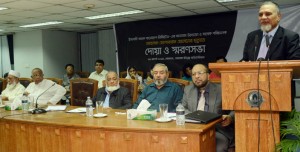 Speakers at the meeting discussed the life and works of late Mosharraf Hossain and recalled his role in promoting the nation with profound homage. They highlighted his foresighted role and contribution in the readymade garments industries and mobilization of foreign remittance for sustainable and long term economic development of the country. They said that late Mosharraf Hossain may be an example of successful entrepreneur with honesty, foresight, wisdom and amicable personality. He was a dynamic, inspiring leader and motivating guide. His friendly personality could easily attract ones. He was a dedicated person for the welfare of the country as well as the nation. The speakers expressed deep sympathy to the bereaved family members and prayed for his eternal peace.