Islami Bank Bangladesh Limited (IBBL) won Bank of the Year Award 2016 conferred by The Banker and Financial Times Group, London. Mohammad Abdul Mannan, Managing Director and CEO of the bank received the award from Brian Caplen, Editor of ‘The Banker’ on December 7, 2016 at Hilton London Bankside. More than 400 dignitaries attended the award giving ceremony from senior management over 120 banks across the globe. The award is the most sought after of its kind and is regarded as the Oscar in banking industry. 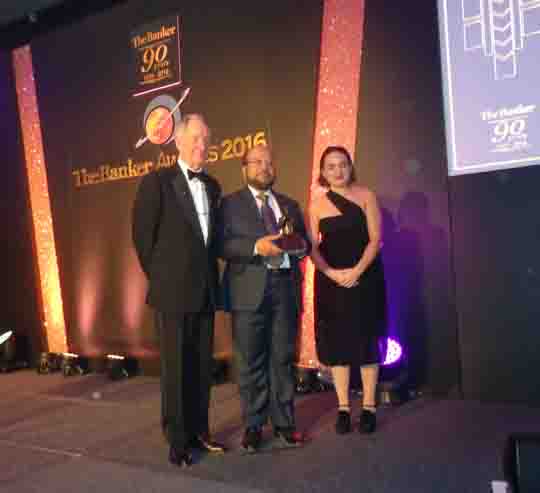 Limited after a vigorous analysis of the performances over the years. The aim of this award is to highlight industry wide excellence within the global banking system. Since 1926, The Banker has been a prime source of global financial intelligence and a window on the world’s key banking and economic developments. The Banker is a UK based premier monthly magazine of record for international banking and finance community for 90 years.

Islami Bank is the only Bangladeshi Bank awarded ever by the The Banker. The bank is being placed among the World’s top 1,000-bank list ranked by The Banker since 2012. In 2016, the Bank was recognized as the best Managed Bank in Bangladesh by The Asian Banker and its Managing Director and CEO Mohammad Abdul Mannan was crowned with Asian Banker CEO Leadership Achievement Award being selected among 11 thousand CEOs of 65 countries from Asia and Asia Pacific Region. In addition, a good number of awards have been conferred upon Islami Bank both from local and global renowned organizations in 2016. The bank is functioning as the 1st Shariah based bank of Southeast Asia for more than three decades and achieved many accolades for its outstanding contribution in the country’s economic development.