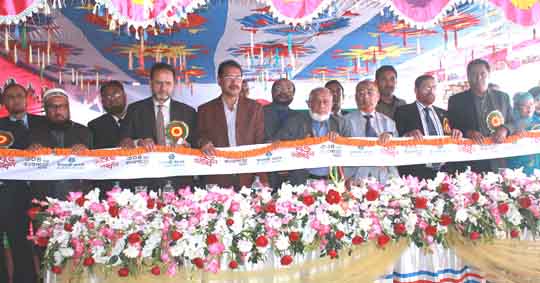 Engr. Md. Eskander Ali Khan, as the chief guest, said Islami Bank has been contributing in overall economic development of the country by expanding trade, industry, health care, agriculture, SME, enterprenure development, employment creation and infrastructure. Rural Development Scheme of the Bank has upgraded the living standard of 1 million marginal people and involved them in the mainstream economy of the country, he said adding that the services of Islam Bank is open to all. He, however, gave directives to the bank officials to keep role in improving the living standard of the people of Kalapara through banking services in agricultural and industrial investment, business expansion and employment generation.

Humayun Bakhteyar, ACPA, FCA said that Islami Bank is the leading commercial of the country in import-export, garments, remittance and SME investment. He hoped that the people of Kalapara would contribute to the national progress beside their economic development by taking investment facilities and other banking services from Islami Bank.

On the occasion of opening of 304th Kalapara Branch, a seminar on ‘Superiority and Success of Islamic Banking System’ was held at the Branch premises on December 22, 2015. Presided over by Md. Shamsuzzaman, Deputy Managing Director of the Bank, Dr. Md. Abdus Samad, Member, Shariah Supervisory Committee spoke as the chief discussant. Md. Abdul Quddus, Executive Vice President and Head of Barisal Zone, presented keynote paper in the seminar. Maulana Golam Mostafa, former Khatib of Khepupara Central Mosque discussed herein. Md. Mosharraf Hossain, Executive Vice President was present in the seminar among others.