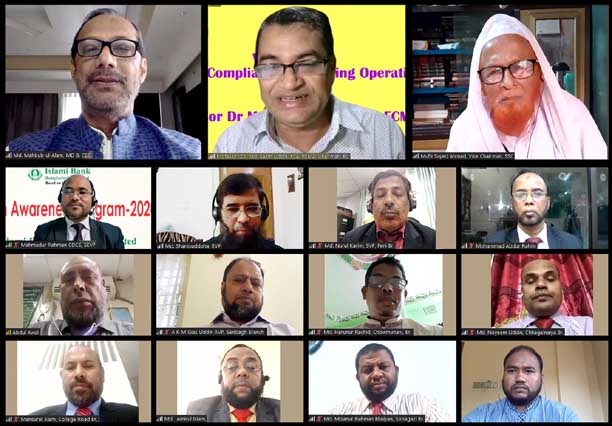 Professor Dr. Md. Salim Uddin, FCA, FCMA said that, Shari`ah is the backbone of Islamic Banking. The purpose of Islamic Banking system is achieved through the compliance of Shari`ah at all levels of the personal lives of employees in addition to professional responsibilities in banking activities. He said, this banking system is implemented by spontaneously following and imitating social norms, religious regulations, tolerance, implementation of principles, procedures and parameters of Shari`ah. He emphasized on the need to act responsibly in the compliance of Shari`ah, avoiding ceremonial and liberal compliance.

He said, Father of the Nation Bangabandhu Sheikh Mujibur Rahman, the then Prime Minister of Bangladesh attended the OIC Conference in 1974. There, it was decided to establish an International Bank of the Muslim States. In this backdrop, Islamic Banking starts operation in Bangladesh later on. He paid tribute to those who have contributed to the establishment of Islamic Banking in the world including Bangladesh. He also added that, Islamic Shari`ah is the source of solution to all problems. Islamic Shari`ah and Islamic Banking are essential to serve the humanity, better life and dignity, he added.  He said, 25 percent banking of Bangladesh is being conducted under Islamic banking financial system. Islamic banking is governed by both Shari`ah principles and traditional rules and regulations. He said, in order to implement Shari`ah banking, bankers, clients and stakeholders needs to nurture social and human values, welfare, sincerity, devotion, transparency, accountability and compliance in the personal and professional life.

Md. Mahbub ul Alam said that, Islamic Banking is a universal banking system. By providing welfare services to all people irrespective of caste, creed and class, IBBL has achieved global recognition beyond state boundary. He said, IBBL has achieved this position of excellence by dint of honesty and Shari`ah principles among its clients and officials as well as sincerity, dedication and modern technology-rich services.