Bangladesh captain Mushfiqur Rahim has opened up about his and the team’s disappointment at the proposed two-tier system in Test cricket. He has become the first international cricketer to voice his opinion about the ‘position paper’ which is put forward by a working group of the Finance & Commercial Affairs committee of the ICC. 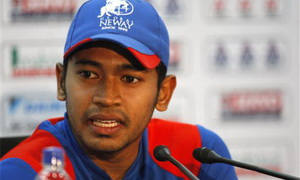 Bangladesh’s main concern is their future in Test cricket. One of the proposals is to make the teams ranked Nos. 9 and 10 play in the Intercontinental Cup (the ICC’s first-class tournament for non-Test nations) from 2015. That will leave very little room for Bangladesh to play any more Test matches against the top eight countries, particularly if the FTP is done away with and series are decided on a bilateral basis. Currently Bangladesh are No. 10 in the ICC Test rankings.

Mushfiqur was left frustrated by yet another off-field issue bothering the Bangladesh cricket team. The build-up to the Test series against Sri Lanka, starting in less than two days, has already become something of a sideshow with so much talk about the draft proposals. He thinks that players must have a say in such big decisions, mainly because it is they who do the job out in the middle.

“If the two-tier system does happen, then what is the use of all this?” Mushfiqur said. “We work very hard to play cricket, so it will be very disappointing if it does indeed happen. This is a big issue, so it is quite obvious that I will feel bad. It is not in our hands. In the last two or three series, we are facing one problem after another.”

“Whatever decision is taken, we have to play in the field. We have to face the consequences of every decision.”

Mushfiqur said the Bangladesh players have been talking about the planned new system, which has the potential to put their cricket careers in doubt. But he doesn’t believe his side has anything else to prove. He also doesn’t think the cloud over their Test future is working as an extra motivation at this stage.

“We have been discussing the matter, and everyone has a similar sentiment. What if this is what happens in the end? But I don’t think it is working as a motivation. It is not in our hands, so there is not much to be motivated about from this. We have played some consistent cricket in the last two years. We just have to continue on that.

“We have nothing to show to anyone. I think we can fight them with the team we have and the consistency we have shown. I hope everything gets better, and I hope such a thing doesn’t happen and we get to play.”

He feels the time has come for him to talk to players from other countries, to probably find a solution to the dilemma, while at the same time maintain communication with BCB officials so that the right decision is taken.

“We haven’t talked to players from any other country. But maybe we have to do so quite soon. We haven’t had the chance to speak to them [officials] too. We have spoken informally but nothing official as of now. I hope whoever is in charge of this decision, do so in the best interest of the country.”

Meanwhile, the BCB has said it will oppose the two-tier system, and that the decision was taken unanimously by the directors.

“The draft proposal had a lot of components, one of which was Bangladesh not playing Test cricket from 2015,” BCB’s spokesperson Jalal Yunus said. “All 23 were opposed to going down to the second tier. The BCB are against Bangladesh playing in the second tier.”

The statement on Saturday came after growing criticism at home, led by former BCB president Saber Chowdhury who wrote an open letter to the incumbent chief, blasting him and the board directors for aligning with the draft proposal.

“The voting was not on the resolution of the board. It was on a strategic issue, on which we sought opinions of all the directors,” Jalal said. “In terms of the financial issues, we want to discuss with other member countries, after which we will take a decision.”