India is concerned with Bangladesh’s decision to order to buy two submarines from China. There are also indications that Chinese submarines have been sneaking into Indian territorial waters in the Bay of Bengal undetected. These developments have led to the Eastern Naval Command seeking more presence in the Bay of Bengal region.

“Why would Bangladesh need submarines? This decision by the government there and the ongoing strife in the country is a matter of concern for us. We also suspect that Chinese submarines are sneaking into Indian territorial waters in the Bay of Bengal region, though none has been detected as yet. This is reason enough for greater naval presence in the region. At the moment, India isn’t really prepared for any conflict in the Bay of Bengal region near West Bengal due to the lack of adequate infrastructure,” a senior Indian Navy officer said. 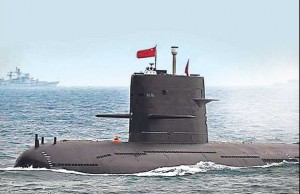 Several measures have been proposed by the Navy in Bengal to improve the situation. While acquisition of land at SagarIsland for a missile battery is in its final stage, the ministry of defence has decided to bear part of the cost for setting up of the deep-draughted port there. This will allow naval ships to dock there and pick up supplies for patrolling the Bay of Bengal. The Navy is also going ahead with its plans for setting up an unmanned aerial vehicle (UAV) base at the Behala airfield, reports TNN.

“The Sagar port is of great strategic importance. As per the RITES report, there is a funding gap of nearly Rs 3,500 crore. There will be the need to base land-to-ship and surface-to-air missiles at Sagar. Apart from this, there will be need for a communications centre and radar station. During a conflict situation, an examination anchorage will be required to inspect vessels in the vicinity. This has to be within missile range. There will also be the need for storage space for rations and ammunition for ships. The infrastructure will be in place soon. Gradually, we plan to bring in moving missile coastal batteries (missiles mounted on trucks). If required, new missiles will be acquired. The MoD is ready to pump in funds for the port in Sagar as this will be crucial in the scheme of things. The Kolkata Port Trust has asked RITES to prepare a fresh financial report based on our offer,” said Commodore Ravi Ahluwalia, naval officer in charge, West Bengal.

The Navy doesn’t believe that the floating border outposts maintained by the Border Security Force (BSF) in the Sundarbans aren’t adequate to prevent any sea-bound threat to the country. The NOIC believes that anti-national elements will target that area once security is tightened along the porous land orders. The UAVs will be crucial to check this.

“We are still working on land acquisition at the Behala airfield for the UAV base. We only require between 15-18 acres there for the base. The UAVs would take off from there and then their control would be handed over to a base in Sagar. The land that has been offered to us isn’t quite satisfactory as there are some encroachments and the boundary isn’t clearly demarcated,” Commodore Ahluwalia said.