The four-day 9th International Plastic Fair 2014 will begin here on February 23, which is expected to bring together some 350 participants from 17 countries.

Leaders of Bangladesh Plastic Goods Manufacturers Association (BPGMEA) at a press conference at its office on Tuesday announced the schedule for the fair. 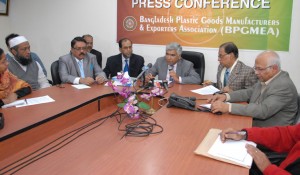 Speaking on the occasion, BPGMEA president M Jasim Uddin said there will be about 350 stalls in the fair where participants from 17 countries, including China, India, Pakistan, Taiwan, Korea, Malaysia, the UAE and the UK, will showcase their products along with the local industries.

“BPGMEA has been organising the fair with an aim to get in touch with the state-of-the-art technologies, machines and products in the sector across the world. In this sector, the change in the technology and the products are frequent,” he said.

“The fair is also providing a great opportunity to the entrepreneurs — mostly the small and medium ones — for better exposure,” he added.

Jasim noted that the plastic industry in the country has great potentials as China, the largest global producer of plastic goods, will no longer remain competitive anymore due to the increase of labour cost.

He, however, expressed dissatisfaction that the government is lacking the appropriate measures to boost the growth in the sector. “We’ve signed memorandum of understanding (MoU) thrice earlier with the authorities for the establishment of a plastic industrial park, but with no result,” he said.

Besides, plastic industries lack the support from authorities for the recycling of plastic waste, for which the industry is earning a bad reputation.

“Waste collection is not our job. It’s the responsibility of the local governments and city corporations,” he said.

Nearly Tk 15,000 crore plastic products are marketed annually in the domestic market, while the industry exports about Tk 2,000 crore worth finished goods as well as Tk 700 crore worth semi-plastic goods.

There are some 5,000 small and heavy plastic industries in Bangladesh which employs around 12 lakh workers.