The Jahangirnagar University Journalist’s Association (JUJA) hosted an Iftar party on Thursday at the seminar room of Jahir Raihan Auditorium here on the campus.

A good number of teachers including Deans of different faculties, Provosts of different residential hall, students and staffs of the university took part in the programme. 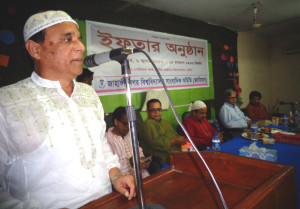 Admiring the role of JU journalists, speakers said that we have also urged to them (Journalists) to play an important role to safe our campus as well as our country without any fear and favors.