Visiting Indian External Affairs Minister Sushma Swaraj on Thursday said India wants to resolve all the bilateral issues between Bangladesh and India once and for all through cordial discussions as it is looking forward to a very positive and growing relationship with Bangladesh.

“We want to resolve all the bilateral issues once and for all through cordial discussions,” Sushma was quoted as telling Prime Minister Sheikh Hasina when she made a courtesy call on the PM at her office. 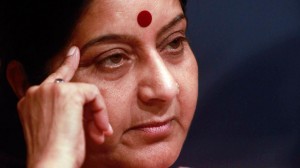 About the Land Boundary Agreement (LBA) with India, Sushma said the Bill is already in Indian parliament and under the active consideration of their government.

The Indian External Affairs Minister said before coming to Dhaka she had talks with West Bengal Chief Minister Mamata Banerjee who has sent her good wishes to Hasina saying that things will move positively.

In response, Hasina said Bangladesh is also eagerly wants Modi to visit Bangladesh and extended an invitation to Modi through Sushma in this regard.

Terming poverty the main enemy of South Asia, the Prime Minister said all will have to work together to alleviate poverty from the region. “For alleviating poverty, we must have good relations with the neighbours.”

In response, the visiting Indian Minister thanked Hasina for her firm resolve to this end.

The Prime Minister also requested India for extraditing all Bangladeshi criminals hiding in India, including Nur Hossain, after committing crimes in Bangladesh.

The Bangladesh Prime Minister also requested the Indian government to simplify the Indian multiple visa processing procedure, especially for elderly Bangladeshi citizens aged over 65 on purpose like tourism and treatment as well as simplifying multiple visa for Bangladeshi students aged below 18.

Responding to the Indian request for using Bangladeshi roads for transporting rice with Agartala, Hasina said for that the road conditions need to be improved and sought Indian assistance to this end.

Hasina said that Bangladesh will try to help India in this connection since the country has historic relations with Aagartala, particularly during the War of Liberation in 1971.

The Prime Minister stressed the need for establishing Bangladesh China India Myanmar (BCIM) economic corridor for the betterment of this region.

She also put emphasis on trilateral relationship among India, Bhutan and Bangladesh for harnessing hydroelectric power generation scheme where Nepal can join latter.

Hasina also sought Indian support in importing refined oil from India through pipeline along Asam-Nagaland-Parbatipur border so that the northern region of the country is covered.

Sushma said that her Prime Minister Narendra Modi had asked her to visit Bangladesh when he was in Bhutan tour.

In response, the Prime Minister thanked Sushma to choose Bangladesh as her first destination of her foreign tour.

Besides, the issues for increasing the coaches for train service of Moitree Express between India and Bangladesh alongside improving bus service were discussed at the meeting.

On her arrival at the PM’s office, Sheikh Hasina received Sushma proceeding up to the stairs of her office and did so while seeing her off.