Bangladesh’s highly productive leather sector, under growing international scrutiny for destructive environmental practices, now seems poised for new growth as a major environmental upgrade nears completion. For decades, pollution from Dhaka’s tanneries has poured into the Buriganga River, wiping out aquatic life and forcing the city to rely heavily on groundwater for washing and drinking. But a new industrial campus and a central effluent treatment plant (CETP) on the outskirts of the city are promising an environmental turnaround that has quieted international criticism and sparked new economic optimism. 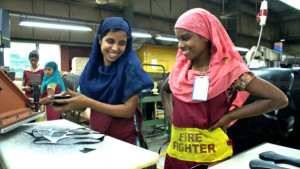 An environmentally sound leather sector in Bangladesh has the potential to take a larger share of the global export market and become a key driver of the nation’s development.

In May 2014, the Bangladeshi leather sector crossed the $1 billion mark in annual exports for the first time. Compound annual growth for the preceding five years was over 25 percent, and there are early signs that the industry is moving towards higher value-added production, more diversified export markets, and innovative new products. Export manufacturers in Bangladesh have been slow to venture beyond ready-made garments, but with more attention from policymakers and an improved environmental image internationally, the leather sector appears ready to change this.

Industry insiders and policymakers agree that the relocation of the leather industry for environmental compliance has been an important catalyst. The Asia Foundation has supported the relocation since 2012, working very closely with the two primary leather associations and the Ministry of Industries to set up a coalition of reformers who have spearheaded the environmental compliance project. It was due to the efforts of this coalition that the reform initiative, first proposed in 2003, finally gathered steam in October 2013, with the signing of an MOU between the leather associations and the government. Through high-profile dialogues, analytical work, and informal interactions, the coalition helped persuade sector leaders and government policymakers to share responsibility for relocation costs and management issues.

Obstacles remain, but the relocation process is now well underway. The CETP, the primary waste-treatment facility in the new industrial estate in Savar, is more than 50 percent completed, and expected to be inaugurated in December 2015. Of 155 tanneries relocating to Savar, 64 have already completed significant construction, and another 76 are in the initial stages.

One indicator of the structural changes in the leather sector that have been accelerated by the reform is the shifting composition of exports among three categories of products: finished leather, leather goods, and footwear. As recently as 2008, 62 percent of all export earnings from the sector came from finished leather, but by 2014, this proportion had fallen to 39 percent, as earnings surged in the higher value-added categories of leather goods and footwear.

The image boost from the leather sector’s environmental reforms may also have opened doors for allied sectors. Bangladesh now produces products such as fabric-based footwear for global retailers including H&M, Decathlon, Kappa, Skechers, Fila, and Puma. According to the Export Promotion Bureau, non-leather footwear exports reached $171.57 million last fiscal year. Another exciting development is the rise of eco-friendly leather, tanned with vegetable- and syntan-based (synthetic) materials instead of chromium to minimize environmental hazards. Eco-friendly leather is now being used in many products including car seats, children’s shoes, handbags, covers for electronics, and aircraft seats, according to Mr. Aniruddha Roy, the managing director of RMM Leather Industries, which was the first Bangladeshi company to receive an international award for production of eco-friendly leather.

Positive perceptions of the leather industry’s progress, and its growing competitiveness in producing world-class products, are beginning to attract the interest of foreign investors. At least 51 foreign companies have expressed interest in establishing joint-venture footwear units in Bangladesh. One Chinese-Bangladeshi joint venture plans to invest $21.5 million in a new footwear plant that will employ over 3,000 workers. Industry insiders have estimated that the workforce in footwear and finished goods could double after the tannery relocation. Female workers in particular will benefit, as they represent around 70 percent of the workforce in these product categories. With new economic opportunities for urban and rural women, the leather goods sector should have a positive effect on the social development indicators for Bangladesh.

As China, Vietnam, and Brazil, the three largest leather exporters, have shifted their focus due to rising labor costs, an environmentally sound leather sector in Bangladesh has the potential to take a larger share of the global export market and become a key driver of the nation’s development. And with the timely environmental reform, it’s just a matter of time until a younger generation of entrepreneurs achieves global recognition for Bangladeshi footwear manufacturing. As former U.S. Ambassador to Bangladesh Dan Mozena has said, the leather sector will be one of the four legs upon which Bangladesh will stand as the next Asian Tiger.

By Syed A. Al-Muti and Nayef Ahmad