Hindi film ‘Liar’s Dice’, a road drama starring Geetanjali Thapa and Nawazuddin Siddiqui in lead roles, has been selected as India’s official entry to the best foreign film category at the Oscar 2015 awards. 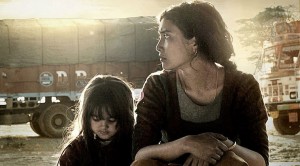 The other films which were in the race included ‘Shahid’, ‘Queen’, ‘Mardaani’, Marathi films ‘Yellow’ and ‘Fandry’ and Bengali films ‘Jatishwar’ and ‘Apur Panchali’.

The 104-minute feature film was selected by a 12-member jury headed by eminent filmmaker T Hariharan from 30 entries.

‘Liar’s Dice’ follows a young tribal woman living in a village near the Indo-Tibetan border who embarks on a journey with her young daughter to Delhi in search of her missing husband. On the way, she meets an army deserter, played by Siddiqui, who realising the perils of the journey ahead for them decides to accompany them to their destination.

Mohandas, an actress-turned director who struggled for some years to raise funds for the film, said the nomination was an “icing on the cake” for her small budget independent production.

“It is a very exciting news for the cast and crew. A lot of hardwork and some amount of luck has gone into ‘Liar’s Dice’ getting nominated as there were other equally good films in the race,” Mohandas told PTI.

When asked how she planned to take the campaign for the movie forward, the debutant director said she is leaving that decision to her producers Jar Pictures.

“I don’t know what happens after that. It is new for us and we will learn along the way. I leave the campaign to my producers and the people of India. I have managed to tell a sincere story about a woman’s journey and the plight of labourers. So, I feel my job is done as a filmmaker.”

‘Liar’s Dice’ was critically acclaimed in the festival circuits. It was screened at the Sundance Film Festival and International Film Festival Rotterdam.

India has never won an Oscar in the best foreign film category. The last Indian film that made it to the final five nominees at the Oscars was Ashutosh Gowariker’s ‘Lagaan’.

‘Mother India’ and ‘Salaam Bombay’ are the only other two Indian films to have made it to the top five.

The 87th Academy awards event will take place in the US on February 22.