A non-profit platform in Bangladesh is aiding in the setup and sustenance of libraries in remote districts and villages of the country. The efforts of the Village Library Movement, initiated in 2006, have already benefited at least 3,000 readers through nearly 30 libraries.

The platform is content that most of these libraries are playing a role towards community development in the country, besides providing rural youth and adults with an opportunity to read more. 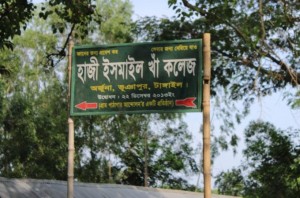 Humayun Kabir, 24, the founder of Shanok Boyra Anusandhan Library in Bhuiyapur of Tangail, is satisfied with the number of readers who frequent his library daily. Kabir, who loves books as well, had founded the library in his bedroom in April 2012.

Kabir currently resides in another district where he works for a living now. But that does not stop the readers to come to the library in his house and read books, both fiction and non-fiction, along with dailies and journals. They can also take them home by registering in a record book by themselves.

Kabir says, though the system is open, the library has not lost any of its books, so far. “Religious books and novels are most popular,” he informed.

In order to encourage the habit of readership, the library organises annual reading contests.

Shahinur Islam, 20, a student of Hemnagar Degree College, had won the first prize at last year’s reading contest. He shared with Al Jazeera that before the library was setup, he bought books from a market that is a few kilometres away from his house. He also had to borrow books from others to quench his thirst for reading.

“Libraries are required in every rural and urban area, he said. “Usually the youth have very little to do after their school or college hours. A library can help them acquire knowledge and entertainment through books,” he said.

Shahnaz Akter Sumi, 22, of the same village and a mother of a three-year old, came second during the reading contest last year by reading the highest number of books.

“My husband encourages me to read more books. I try to read novels and religious books mostly,” she said.

She recalled that before the library was set up, she had to buy books from different fairs and shops in the upazila headquarters, nine kilometres away from her house.

“With this library in the village, it saves time, money and energy,” she said.

Kabir said that although the library has nearly 200 members from the village, the number of books in the library has not crossed 100. “These are mostly donated, as the library was initiated by myself and it still has no funds to buy books,” he said.

He is looking forward to more donations, as “a number of economically-solvent village elders with interest in intellectual development, have promised to donate books.”

Kabir was encouraged to set up a library in his village after he visited a book fair organised by Arjuna Onnesha Library in neighbouring Arjuna village. Arjuna Onnesha Library was the first library setup by Gram Pathagar Andolon or Village Library Movement (VLM), a non-proft platform that feels the need for library services to promote reading habit besides making youngsters socially and politically conscious and active.

“We had helped Kabir with information and methods through which he can provide library services in his village,” explained Abdus Satter Khan, Coordinator of VLM. A teacher by profession, Khan added, “We had also helped him connect with people who wanted to donate their books to his library.”

Khan told Al Jazeera that Arjuna Onnesha Library’s success had encouraged others to come forward and seek their help.

The library at Arjuna, although initially set up in Satter’s bedroom in the village in 2006, is now housed at the proposed Haji Ismail khan College. It needs to be noted that the college was established through the efforts of members of the Arjuna Onnesha Library.

The library currently has around 5,000 books in its collection.

Khan pointed out that till date, VLM has helped setup at least 30 libraries in Tangail, Khagrachhari, Chandpur and other districts, catering to at least 3,000 readers. “There are many more awaiting in the pipeline,” he said.

“Our main target is to organise the youth in villages to identify the problems and potential of their villages and solve the problems by their own from their own resources,” said Khan.

Being true to the vision, almost all of the 30 libraries have been engaged in community development work.

“Initially, the elders of our village were sceptical about the library,” recalled Md Limon Khan, former chairperson and a member of Arjuna Onnesha Library. “But the members of the library have fixed roads, worked toward relief outreach during floods and disasters, erected tube wells in remote area, constructed bus-sheds in the village and much more till date. Now, the locals are eager to help in all initiatives taken by the library,” he said.

Last December, the members of the library felt that a college in the village will help the community as the nearest college is two kilometres away. “Members of the library collected funds, bought the land, bought raw materials and have managed to construct the Haji Ismail Khan College in a matter of six months,” he said. Classes are scheduled to begin in the college from July 2014.

Sathowai Marma, founder of Rafru Memorial Library in Rajjomoni of Khagrachhari, said that his library and neighbouring Aurong Library had provided aid to repair temples in surrounding areas. “Such work has helped in uniting our members while also attracting the attention of other youths toward the library,” he said.

Khan said that the movement aims to help setup a library in each of the 388 unions in Bangladesh by year 2025.