A medley of vast conflicts and far-reaching consequences, there’s very little confidence in in future of Afghanistan these days. Karzai, the only president the Afghans have known since the Taliban were driven out, is keen to lose the backing of the American military and close the open checkbook that ensures salaries and benefits for the Afghan army and police forces. Instead, he is insisting on the US supporting a peace deal with the Taliban. The recent Loya Jirga of almost 2500 tribal leaders also supported the US alliance but Karzai is betting the promise of 2014 in signing an accord with the Taliban, which according to him might bring more peace to the nation than a deal with the US military.

This is the year that will determine Afghanistan’s future. In the deeply fissured nation, this future depends on achieving security, peace, and stability after the NATO troops withdraw forces in 2014. 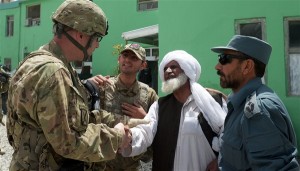 In an e-mail exchange, Zabiullah Mujahid, media spokesperson for the Afghan Taliban, talked about several important issues the country faces right from the presence of US troops to their stand on violence and education of women in the country.

This is critical at a time when Afghan President Hamid Karzai is struggling to sign a security agreement with the United States regarding remaining US troops. There is also the impending issue of presidential elections, merely five months away, which the Taliban recently decided to boycott. The exchange, conducted several months ago, sheds light on the fact that the Afghan Taliban continues to stick to its non-compromising, non-consensual stance.

Americans will eventually leave, but the Taliban will remain forever. Karzai seems to acknowledge this fact a bit too strongly given his recent rebuff of the US proposed security deal. So whom does Karzai make the deal with – the US or the Taliban? If he signs up with the United States, he’s committing Afghanistan to another era of long-term war against the Taliban and its allies. If he doesn’t sign the agreement, he loses out on the annual $8 billion funds needed desperately by the country to rebuild itself.

Meanwhile, asked whether the Taliban is open to discussions for a place within the government or to form an alternative government within the country; Mujahid’s reply centered on the fact that they want to establish an independent Islamic government. Mujahid said, ‘we have sacrificed a lot to achieve this goal and this sacrifice should be considered when any decision regarding new governance is made.’ Does this mean that Taliban is open to a bare minimum presence of US troops? Or, is the group hoping for the near impossible eventuality of a complete withdrawal of US troops? Mujahid agreed with the latter, replying emphatically that ‘we don’t think NATO has any right or authority to control the freedom of Afghanistan.’ He added that given the complete withdrawal of Americans, the group would want to play a role in rebuilding the nation using its “rich mineral wealth, good workforce, and agriculture.”

That appears to a big bet for the new president, to whom Karzai is leaving the herculean task of signing the security deal. If Taliban’s preconditions are met, what is the chance that the new government and security forces will be strong enough to survive economic, financial, and political challenges without US help? What is the guarantee that the Taliban will not surge and ensue a new phase of civil war? To the world, bewildered by Karzai’s unpredictable reaction to the security deal, these chances are close to none. To Mujahid, questioned on these issues, the answer is non-chalant: ‘we will continue jihad till the time we do not force the Americans to leave us alone as we did with the Soviet Union. Inshallah we hope for a new victory in 2014.’

Mujahid said that all areas controlled by the Taliban are in a continuous state of war. If the Americans leave, the group made tall claims of providing education and financial stability to Afghans. While there was no clear strategy as to how this could be implemented, Mujahid repeated, ‘I have already told you that we will do our best to rebuild this country.’

What does it mean for women? Clearly Taliban has been known for its oppressive strategies when it comes to women and their role in the society. Mujahid was quick to point out that Taliban’s road map and strategies will remain completely Islamic and follow the guidelines of Shariat Mohammadi. ‘In future, all our sisters will get their rights and roles within the boundaries of Shariat.’

If Karzai is wrong, the consequences in 2014 will be enormous. The world is watching keenly as the future of a fledgling nation is laid to rest.