The living cost in the capital witnessed a 11 percent rise in  2013 hitting hard the poorer section of the city’s over 1 crore population, according to an annual report released by the Consumers Association of Bangladesh (CAB).

The cost of living has been calculated on the basis of the ‘weight’ of products and services available in consumers’ basket, said the report released on Wednesday. 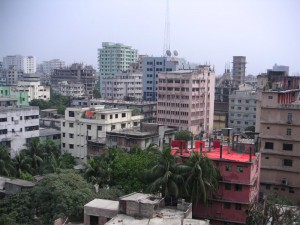 In line with the price hike of essentials, electricity, drinking water and fuel, the house rent in the city also witnessed a significant rise — 10.91 percent in 2013.

“Many families are forced to move to sub-towns from the city due to sharp rise in house rent,” said the report.

The report showed that the prices of products and services increased by 12.17 percent in the same year which has also witnessed political instability disrupting the supply chain.

The CAB made the report assessing the prices of 114 products, 26 essential commodities and 10 services.

The percentage of the price hike of products and services has been calculated considering the product and services price of some 15 wholesale and retail markets in the capital.

Assessing the prices of products round the year, the CAB found that the prices of ginger, onion, garlic and green chili marked the highest 38.64 percent. “The price of onion has been on the rise since June (2013).”

Meanwhile, electricity price increased by 7.30 percent while that of fuel price by 5.65 percent in 2013. The same way, the price of water (Wasa) was increased by 5.01 percent.

The CAB recommended steps for proper imposition of ‘Competition Law’ to prevent syndicate in the market and urged the government to take necessary steps for making the Trading Corporation of Bangladesh (TCB) effective in true sense.