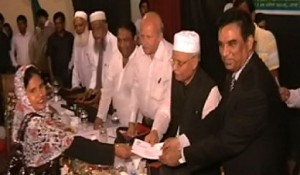 The fair was organized so that the customer service of the bank can be reached to the marginalized people. Three crore and seventy two lac taka was distributed among 54 people in the fair.

In his speech, local MP Rezaul Karim Hira said, “This attempt of Pubali bank is really praiseworthy. The marginalized people will get benefit by taking this loan.” He thanked the bank authority for this attempt.

Additional Managing Director of Pubali Bank M. A. Halim Chowdhury said, “We give preference to women employment and self help the most. Pubali bank has come forward keeping this in mind”. He said, “This amount of loan has been distributed to increase the participation of women in working sector.”