The red carpet was rolled out as Malaysian Premier Najib Razak and his spouse Rosmah Mansor arrived in the city this evening on a three-day official visit to Bangladesh.

Ministers, advisers to the Prime Minister, the chiefs of the three services, the Malaysian High Commissioner in Dhaka as well as high civil and military officials were present on the occasion. 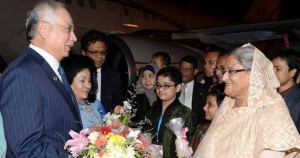 Later, Sheikh Hasina introduced her cabinet colleagues and other dignitaries to the Malaysian premier, while Najib Razak introduced his entourage members to Bangladesh Premier.

After a warm welcome at the airport, the Malaysian Prime Minister was taken to Sonargaon Hotel through a ceremonial motorcade.

According to the foreign ministry officials, the Malaysian premier is visiting Bangladesh at the invitation of Sheikh Hasina, who made the invitation to Najib Razak during the United Nations (UN) General Assembly in September.

in Gazipur at 10 am tomorrow.

A noted Malaysian company namely KPJ, which has reputation in health sector, will be in charge of the operation and management of the hospital.

As per the programme schedule, Sheikh Hasina and Najib Razak will have a tete-a-tete at the Prime Minister’s Office at 4.15 pm tomorrow

Later, both the premiers will join official talks where they are expected to discuss different bilateral issues, including manpower export and Malaysian investment in Bangladesh.

The two countries are likely to sign two agreements on cultural exchange and technology transfer.

The Malaysian Prime Minister will later call on President Abdul Hamid at Bangabhaban at 5.45 pm.

The Malaysian premier arrived here after attending the Commonwealth Heads of Government Meeting (CHOGM) in Colombo.

He is scheduled to leave Dhaka on Tuesday morning.