Tripura Chief Minister Manik Sarkar today requested the Centre to talk to Bangladesh government for restarting railway services from Agartala to the neighbouring country. “Government of Bangladesh may be pursued to take all necessary actions and Railway Ministry may take up this (restoration of rail link) construction work with highest priority,” Sarkar said at the 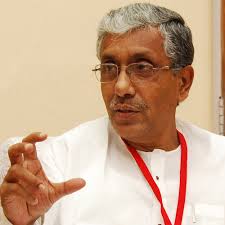 conference of Chief Ministers of all North Eastern states.

“Prior to independence, towns in Tripura were connected by railway network with erstwhile East Pakistan, present Bangladesh and Agartala itself was serviced by Akhaura railway station,” the Chief Minister said. Sarkar said for rapid economic development of Tripura, movement of people and goods through Bangladesh to North East and Eastern India is necessary.

“Prior to partition, Tripura was seamlessly connected to (rest of) India through Bangladesh by road, rail and waterways, which needs to be restored and made operational,” he said.

There is an urgent need to establish connectivity with Chittagong Port in Bangladesh, he added. “Government of India may persuade Bangladesh government for allowing multi-modal transportation of goods through Bangladesh with Ashuganj as the port of call, including related infrastructure development,” Sarkar insisted. The conference, which was attended by DoNER Minister V K Singh, was organised jointly by DoNER Ministry and Assam government here.