Former Indian prime minister Manmohan Singh has been summoned as an accused along with five others in a case linked to the coal scam that saw mining rights being assigned without any transparency to private firms.

A special CBI court today also named Hindalco, its chairman Kumar Mangalam Birla, and former Coal Secretary PC Parakh among the six accused. They have all been asked to appear in court on April 8. 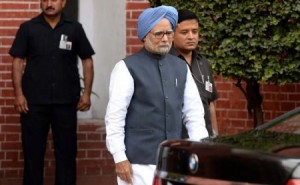 The charges against Dr Singh and the others include criminal conspiracy, corruption and breach of trust.

“Am sure that the truth will prevail and I will get a chance to put forward my case with all the facts. I have always said I am open for legal scrutiny. Of course I am upset, but this is part of life,” Dr Singh told reporters.

The court rejected the CBI’s finding in its final report that there was “no prosecutable evidence against anyone.”

Dr Singh, who was prime minister for 10 years till his Congress party lost power last year, was reportedly questioned by the CBI in January. The agency asked him about the allocation of a coal field in Odisha’s Talabira block in 2005 to Hindalco, which makes aluminium. At the time, Dr Singh held direct charge of the Coal Ministry.

Hindalco, which is part of the $40 billion Aditya Birla Group, had first been refused the coal field it sought, but the decision was later reversed. The company has denied any wrongdoing.

The court had in December asked for Dr Singh to be examined, after the CBI suggested it would like to drop the case against Hindalco.

The scam dubbed “Coal-Gate” surfaced after the national auditor’s report in 2012 questioned the government’s practice of awarding coal mining blocks at a concession to companies without competitive bidding.

The Supreme Court last year scrapped nearly 214 coal blocks allocated by successive governments over the past two decades. The government is now re-auctioning the fields; proceeds from the auction of 31 coal blocks this year have crossed Rs. 2 lakh crores.

“An economist prime minister has been summoned by court only because of Congress scams,” said union minister Prakash Javadekar.