The first ever biggest measles- rubella vaccination campaign began across the country today with a target of brining about 5.20 crore children aged between nine months and 15 years under the programme.

Health and Family Welfare Ministry sources said the programme will continue till February 13.

“The programme is being implemented at a cost of Taka 512.70 crore,” said Health and Family Welfare Minister Mohammad Nasim following inauguration of the programme at the ministry’s conference room on Wednesday, reports BSS. 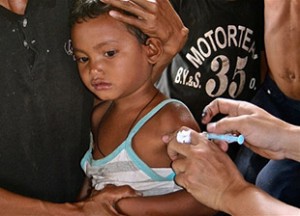 This is the biggest immunisation programme for the children in the country, said the minister.

Earlier, only 3.50 crore minor boys and girls having the age ranging from nine months to 10 years were brought under the catch-up campaign programme since 2006. Around 1.80 crore children were vaccinated in 2010.

Measles is a viral infectious disease and the people of any ages could be affected with the disease. The mortality rate due to the disease is high among children.

People suffer from various complications, including phenomena, diarrhea, malnutrition, encephalitis, blindness and deafness, due to the disease.

On the other hand, rubella is another viral infectious disease. Both mother and children can be infected in 90 per cent cases if the disease broke out within three months of pregnancy.

In Bangladesh, about 2,979 persons are infected with rubella viral disease out of every 10 lakh people.

The health and family welfare ministry would implement the vaccination programme with 67,000 trained workers and 2,41,000 volunteers.