In Bangladesh, there is enormous scope for them to support initiatives, which can generate silent revolution in agricultural development. In particular, financial and technical assistance could trigger a strong campaign on food security, climate smart technology, green technology and other agro-based inventions and interventions. 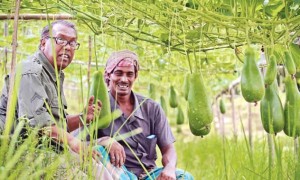 “Community Radios can be another channel to reach marginal farmers and rural community. So there is also scope for both financial and technical support,” he adds.

Niaz Ahmed Khan, Professor at Department of Development Studies, University of Dhaka, and former country representative for IUCN (International Union for Conservation of Nature) that “electronic media is carrying out different programs on agriculture and community based development issues, though the activities are very limited”. If the programs are sponsored by aid communities, it will be better for sensitization on the need for agricultural development, he adds.

“Print media is doing pretty well by publishing features and reports on food technology, food security, crops production, fish culture, technology transfer, and success stories in those areas. But if aid agencies like FAO, International Rice Research Institute (IRRI) or the UN World Food Programme (WFP) come forward and extend financial collaboration to the media, it would be possible to arrange (for publication of) separate pages on environment and agriculture.”

He asks aid agencies to arrange Fellowship and skill development trainings for agriculture journalists and reporters in order to enhance their proficiency in agriculture and rural poverty reporting style and technical knowledge. In this respect, journalists from local newspapers must be given priority along with national print and electronic media journalists, he says.

As an agriculture-based economic zone, the media of Bangladesh still does not have much focus on agro based programs that can reach farmers and marginal communities.

Pre-independence era radio was the only tool for flow of information, and this communication channel played a vital role in Green Revolution in 1960s. Matio O Manush (Soil and Men), a program on Agriculture and Rural Development of Bangladesh Television was launched in the early 1980s. It was hosted by Shykh Seraj.

The objectivity of the program was widely respected. It provided news and views on agriculture issues and reported on success stories thus providing information to people on a large scale, especially to rural and marginal farmer communities, highlighting the role played by government and donor-driven projects.

Hridoye a Mati O Manush (Soil and Man in heart) is the most  popular agro based program in Bangladesh which is broadcasting in Channel I ( a leading private channel of Bangladesh), that is headed by Shykh Seraj since 2004  and has got huge recognition from marginal farmers, economists, policy makers, government officials, aid communities and other stake holders.

Since 2005 this program organizes every year a pre-budget panel discussion on allocations for agriculture, farmers’ concerns, and rural development, which are joined by the Agriculture Minister, policy makers, representatives from civil society, government, local government , development partners, local communities, farmers and other development stakeholders, and discuss the ins and outs of agriculture and formation of agriculture friendly budget and national policy.

“As of now, direct financing of media campaign is not in our program pipeline. However, we closely work with media to promote development, and transparency and accountability, by enabling ADB’s stakeholders – especially people affected by development activities – to better participate in the decisions that affect them.”

Sheikh.Ahaduzzaman, Assistant FAO Representative in Bangladesh confirms that there is hiatus between aid community and media. “It’s quite true that other TV channels aren’t getting the trustworthiness and accountability, especially on agriculture and environmental issues, from aid agencies, whereas Channel I has already succeeded in providing strong and active coverage of ‘Hridoy  A Mati O  Manus’.”

Paula Bianca Z. Ferrer, IRRI’s Public Relations specialist, said that the International Rice Institute does not media to news stories on them. “Instead, our relationship with them is built on goodwill.”

He said: “Communication strategy would have to depend on a specific project’s goal, for example, like the Closing Rice Yields Gap in Asia (CORIGAP) puts emphasis on extension. Other projects like the C4 rice, which is still being developed, obviously cannot put extension as a priority. On the other hand, communicating GM (genetically modified) rice is sensitive, and needs a different communication strategy too altogether.”

At IRRI, he informed, climate change research covers a wide range of research activities such as developing flood- or drought-proof varieties, and others. “All our stories get sent to a broad list of media outlets except only when a news is targeted for a specific region like Africa or if it’s just local news.”

He added: “There might be still some gap between the aid community and the media. It might be because agriculture is seen more as a niche topic? It isn’t immediately appealing or relatable compared with, say, technology, food, travel, world market, etc.”

Diane Shohet, Director, Communications and Marketing, at World Fish explains: “World fish does work with the media to promote our work on climate change adaptation and resilience in fishing communities.”

Asked about financing for media related activities, she informs: “We do not break down our budgets in this manner. We devote staff resource to working with the media. Agricultural Aquatic Systems (AAS) program is committed to participatory action research (PAR), engaging communities in identifying what agricultural interventions are needed to lift them out of poverty and ensure long-term food security where media interventions is playing lead role.”

(The writer is contributing writer at Digital Development Debates, Freelancer at SciDev.Net and a member of the International Environmental Communication Association).