Feeling they had a point to prove, Barcelona’s players delivered in style leaving Manchester City bitter and bruised.

Advancing to the Champions League quarterfinals should be a formality after Lionel Messi scored a penalty and Dani Alves added a late second to secure a commanding 2-0 advantage over City in the round of 16 on Tuesday. 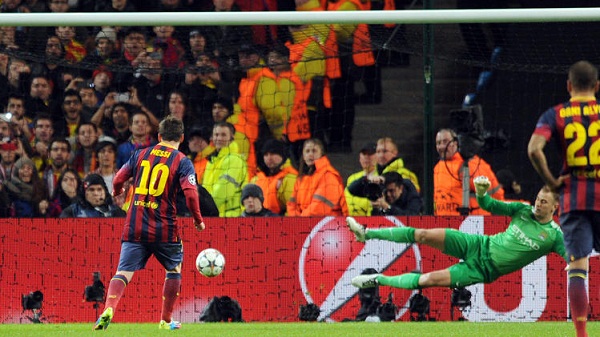 Barcelona midfielder Cesc Fabregas felt confident enough to deliver a message to his team’s critics: “They will have to shut up for a few days.”

It seems incongruous that Fabregas would have to be so defensive of Barcelona, given his team tops the Spanish standings, has reached the Copa del Rey final and is on the verge of reaching the Champions League quarterfinals for the seventh straight year. “There’s nothing else you can ask for,” Fabregas said.

So much for the Catalan giants being a fading force. This win, against a team that seeks to emulate Barcelona on and off the pitch, exposed the gulf between them. And City, which has spent heavily to reach the knockout phase for the first time, couldn’t keep up with the elegant visitors.

Waves of attacks by the Spanish champions had been repelled until the start of the second half when Martin Demichelis couldn’t keep up with the speedy Messi, dragging down his fellow Argentine and conceding the penalty.

Even after Messi made it 11 goals in 11 games since returning from injury, City managed to test Barcelona goalkeeper Victor Valdes more than had it with a full complement of players.

But City couldn’t equalize against the run of play and Dani Alves successfully completed a one-two with substitute Neymar in the 90th minute to score the team’s 113th goal of the season.

It was an unsettling introduction to the knockout phase of the competition for City, with Barcelona’s poise and panache enabling the four-time European champions to remain in near-complete control against England’s emerging force.

Rather than acknowledging the strength of the opposition, City manager Manuel Pellegrini questioned the integrity of Swedish referee Jonas Eriksson.

“From the beginning I could see the ref was not impartial to both teams,” Pellegrini said.

And Pellegrini felt that the referee was not up to managing a game of this magnitude despite being selected by FIFA for the World Cup.

A Swede lit up the night’s other game. Zlatan Ibrahimovic scored twice, between goals from Blaise Matuidi and Yohan Cabaye, as Paris Saint-Germain won 4-0 at Bayer Leverkusen.

The second legs of both games are on March 12, and wiping out a 2-0 deficit would seem to be beyond City at this stage. Especially if it struggles to break up Barcelona’s flowing passing moves like at the Etihad.

Somehow, though, the hosts emerged unscathed from their hesitant start and even produced the first meaningful shot of the match after 25 minutes when Alvaro Negredo curled the ball at Valdes.

For all Barcelona’s dominance, Hart had one meaningful save to make in the first half, pushing away Xavi Hernandez’s long-range strike.

“I thought we maybe gave a little too much respect to them in the beginning,” City captain Vincent Kompany said. “They were there for the taking.”

But City couldn’t and, after a quiet first half by his standards, Messi’s key contribution came after the break, scoring his 66th Champions League goal in the 54th minute, putting him just five from leveling Raul Gonzalez’s record.

Aside from Xavi firing over and Dani Alves skewing an effort wide, City looked more likely to find the net at times in the second half despite chasing shadows so often.

Then a lightening move down the right flank was completed by Dani Alves putting the ball through Hart’s legs from a tight angle, giving Barca a comfortable lead as it chases a first European title since 2011.

“They are incredibly efficient,” Kompany said. “When you play against them you do realize the individual quality of this team is phenomenal and it makes it so difficult to close them down.”