Tacloban, Philippines: Emily Sagalis cried tears of joy after giving birth to a ‘miracle’ girl in a typhoon-ravaged Philippine city, then named the baby after her mother who went missing in the storm.
The girl was born Monday in a destroyed airport compound that was turned into a makeshift medical centre, with her bed a piece of dirty plywood resting amid dirt, broken glass, twisted metal, nails and other debris.
“She is so beautiful. I will name her Bea Joy in honour of my mother, Beatriz,” Sagalis, 21, whispered shortly after giving birth.
Sagalis said her mother was swept away when giant waves generated by Super Typhoon Haiyan surged into their home near Tacloban city, the capital of Leyte province which was one of the worst-hit areas, and she has not been seen since.
More than 10,000 people are believed to have died in Leyte, and many hundreds on other islands across the central Philippines, which would make Haiyan the country’s worst recorded natural disaster.
But, in the most tragic of circumstances, Bea Joy restarted the cycle of life. “She is my miracle. I had thought I would die with her still inside me when high waves came and took us all away,” she said, as her teary-eyed husband, Jobert, clasped the baby and a volunteer held an IV drip above them.

A medical staff tends to Jennifer Sagalis (C) shortly after giving birth inside a destroyed building in the central Philippine city of Tacloban – AFP
The husband said the first wave that came carried their wooden home in the coastal town of San Jose many metres inland, washing all of the family outside. He said the entire community h 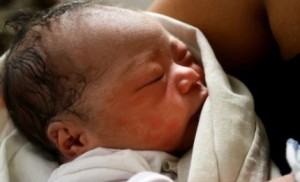 ad been washed away, with the once picturesque area replaced by rubble and the bloated remains of people and animals.
“We are supposed to be celebrating today, but we are also mourning our dead,” Jobert said.
He said it was God’s will that he found his wife floating amongst the debris. They were carried away for what felt like hours until the water subsided, and they found themselves sheltering in a  school building where other mud-soaked and injured survivors had huddled.
The couple and their surviving neighbours subsisted there until Monday morning only on bottles of water they found among the debris. Jobert said he knew that his wife was about to give birth any day, but no help or aid had come.
“She began labour at 5:00 am (Monday) so we had to walk several kilometres before a truck driver hitched us a ride,” he said.
The young military doctor who attended to her, Captain Victoriano Sambale, said the new mother had already broken her waters by the time the couple stepped inside the building, and then developed bleeding during the delivery. “This is the first time we have delivered a baby here. The baby is fine and we have managed to stop the bleeding of the mother,” he said.
However, he cautioned doctors were extremely concerned about potential infections that could easily be caught amid the unsterile conditions, with the medical team almost powerless now to help her.
“Definitely the mother is still in danger from infection and sepsis (septicemia). So we need to give her intravenous antibiotics. Unfortunately we ran out of even the oral antibiotics yesterday,” Sambale said.
Next: World sends emergency relief to battered Philippines

World sends emergency relief to battered Philippines
Manila: The United States, Australia and the United Nations are mobilising emergency aid to the Philippines as the scale of the devastation unleashed by Super Typhoon Haiyan emerges.
The Pentagon is sending military personnel and equipment to assist with the relief effort following the typhoon, which may have killed more than 10,000 people in what is feared to be the country’s worst natural disaster.
“The United States is already providing significant humanitarian assistance, and we stand ready to further assist the government’s relief and recovery efforts,” US President Barack Obama said in a statement.
Some 90 Marines and sailors, and two KC-130J Hercules aircraft, left Japan for the Philippines on Saturday, with equipment including tilt-rotor aircraft which can operate without runways, Marines Colonel John Peck said.
The Australian government pledged Aus$10 million dollars (US$9.38 million), with Foreign Minister Julie Bishop describing the unfolding tragedy as ‘absolutely devastating’ and on a ‘massive scale’.
The sum includes Aus$4 million towards a UN global appeal and Aus$3 million for Australian non-government organisations. The aid will include tarpaulins, sleeping mats, mosquito nets, water containers and health and hygiene kits.
A team of Australian medics will leave on Wednesday via a C17 military transport plane from Darwin to join disaster experts already on the ground, the government said, after it disbursed emergency funds worth US$490,000 on Sunday.
Philippine rescue teams were said to be overwhelmed in their efforts to help those whose homes and livelihoods were destroyed after Haiyan ravaged large swathes of the archipelago Friday. Officials were struggling to cope with the scale of death and destruction, with reports of violent looters and scarcity of food, drinking water and shelter.
United Nations leader Ban Ki-moon promised UN humanitarian agencies would “respond rapidly to help people in need”.
The UN children’s fund UNICEF said a cargo plane carrying 60 tonnes of aid including shelters and medicine would arrive in the Philippines Tuesday, to be followed by deliveries of water purification and sanitation equipment.
Pope Francis led 60,000 people in Sunday prayers for the Philippines, urging the faithful to provide “concrete help” to the largely Roman Catholic country. “Sadly, there are many, many victims and the damage is huge,” he said.
Other aid mobilised for the Philippines includes:
The European Commission said it would give three million euros ($4 million) towards the relief efforts.
Britain offered an emergency support package worth $9.6 million. Germany’s embassy in Manila said an initial shipment of 23 tonnes of aid was being flown in and German rescue teams were already at work.
Like Australia, New Zealand also increased its humanitarian relief on Monday, bringing its total to NZ$2.15 million (US$1.78 million), while Canada has promised up to US$5 million to aid organisations.
Medecins Sans Frontieres (Doctors Without Borders) said it was sending 200 tonnes of aid including medicine, tents and hygiene kits to arrive mid-week, with the first cargo plane leaving from Dubai on Monday and another from Belgium on Tuesday.
Taiwan’s government pledged immediate cash aid of US$200,000 and the Singapore government donated US$40,000.
Oxfam, the British-based relief organisation, said it has sent an assessment team ahead of aid operations.