Shipping Minister Shahjahan Khan on Sunday said mobile courts will be launched to free rivers from encroachers in addition to checking pollution.

The minister made the disclosure at the second meeting of the taskforce committee formed to prevent encroachment and pollution of rivers and maintaining their navigability. 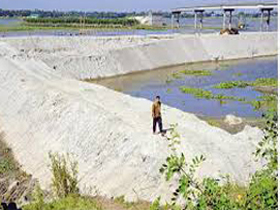 Shahjahan Khan said Bangladesh Inland Water Transport Authority (BIWTA), led by a magistrate, would launch the mobile courts which will take immediate action against the encroachers and the polluters. “No one will be spared if found guilty, whoever they may be,” he warned.

The minister said the problems over the boundary pillars of rivers would be solved.

At the meeting, a committee was formed with Sanjida Khanam MP as its convener to create awareness among people to stop river pollution.

Besides, a decision was taken to form a coordination committee which will work to free the rivers surrounding Dhaka city from illegal encroachers.

A committee, formed earlier with BIWTA chairman as its head, will start work to recover the old channel of the Buriganga River after a meeting on Monday.

Besides, deputy commissioners of all the districts will be sent letters asking them to inform the authorities concerned about river pollution and encroachment in their respective districts.