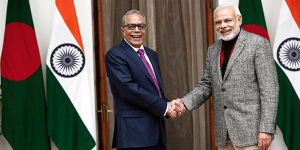 Modi said he has a plan to visit Dhaka as early as possible.

During the half-an-hour meeting, President Hamid lauded the leadership of Modi and his ‘Gujarat Model’ saying his leadership would help the young generation across India for building a prosperous country.

Referring to Bangladesh-India cooperation in power sector, the president sought more help in this regard, specially in the efforts of Bangladesh to import hydropower by Bangladesh from Nepal and Bhutan.

In response, Modi said India is ready to intensify its cooperation in power sector.

Abdul Hamid also laid emphasis on developing regional connectivity and said such connectivity would help the region reap economic benefits for it.

On connectivity issue, the Indian premier said collective efforts will have to be made on developing sub-regional connectivity, including development of infrastructure and tourism. Referring to his meeting with Bangladesh Prime Minister Sheikh Hasina in New York and during Saarc Summit in Kathmandu, Modi said they had successful talks.

The president recalled with gratitude the unprecedented support and assistance extended to Bangladesh during the historic War of Liberation War in 1971.

Modi said he is happy that he had opportunity to meet two great freedom fighters, General Jacob and Bangladesh President Abdul Hamid.