Prime Minister Narendra Modi will take border settlement and water sharing deals to Bangladesh next month as part of his drive to erode Chinese influence in South Asia, although Dhaka is likely to remain dependant on Beijing for military equipment.

India, which has had an uneasy relationship with China for decades, 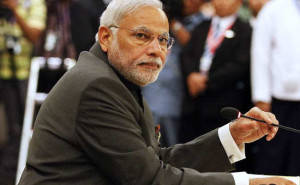 It is also worried China is creating a so-called “string of pearls” across the Indian Ocean by funding port developments in Pakistan, Sri Lanka, Myanmar and Bangladesh.

Modi has won parliamentary approval for an agreement that will transfer a small amount of territory to Bangladesh that previous Indian governments failed to ratify for fear of a domestic backlash. The issue dates back to British India’s partition in 1947.

The prime minister has also persuaded a regional Indian leader to drop her opposition to share water equally from a key river that flows through India before reaching Bangladesh.

“There have been some contentious issues like the land border agreement which, frankly, we should have done years ago,” said an Indian official involved in Modi’s June 6-7 visit.

The migration of tens of thousands of people from Bangladesh into India has long been a sensitive issue in India, with Modi’s Hindu nationalist party making it a key campaign plank.

But since coming to power, Modi has fallen silent on the migration issue and has instead focussed on securing India’s strategic objectives in Bangladesh.

Srikanth Kondapalli, a China expert at New Delhi’s Jawaharlal Nehru University, said China had built close ties with Bangladesh as part of its South Asia diplomacy and that this was a concern for India.

“The number of PLA visits to Bangladesh is nearly the same as to India,” he said, referring to China’s People’s Liberation Army. “Modi is trying to counter it with his neighbourhood outreach.”

Modi has reached out to all of India’s neighbours since he took office a year ago except Pakistan.

But any Indian concerns about Bangladesh’s growing military ties to China, including the planned sale of two Chinese diesel-electric submarines, are likely to fall on deaf ears in Dhaka, said a former Bangladeshi military officer and an Indian expert.

China was the source of 82 percent of Bangladesh’s arms purchases from 2009-2013, according to the Stockholm International Peace Research Institute (SIPRI), making Dhaka one of the top three buyers of Chinese weapons in the world.

A government official in Dhaka said Bangladesh’s first submarines, costing $206 million in total, could be delivered before 2019. China was expected to provide training, said Chinese experts on the country’s ties with South Asia.

What worries Indian military planners is that China might see Bangladesh, which shares the Bay of Bengal with India and Myanmar, as an ideal place for its warships and submarines to dock.

India was alarmed last year when Chinese submarines did the same in Sri Lanka. A new government in Colombo has since ruled out submarine visits in the near future.

China’s Defence Ministry’s had no immediate comment on military ties with Bangladesh. Cooperation between the two countries was normal, China’s Foreign Ministry said.

Bangladesh has never hosted a naval ship from China and has no plans to, according to a government official.

China is helping Bangladesh upgrade its main Chittagong port while the China Harbour Engineering Company has been seen as the frontrunner to win a contract to build an $8 billion deep water port on Sonadia island off the Bangladeshi city of Cox’s Bazaar in the Bay of Bengal.

India’s Adani Group is also bidding for the project.

The Bangladeshi government official said it was unclear when a decision on Sonadia would be made, adding that port operators from the United Arab Emirates and the Netherlands were also interested.

“China, in my opinion, is the best option,” said Munshi Faiz Ahmad, a former Bangladesh ambassador to China, adding that Chinese firms had built big infrastructure projects in a number of countries including Bangladesh, where they have constructed power plants, bridges and roads.

It’s setting up missile batteries and radar surveillance on Sagar island, near the Indian-Bangladesh border, with plans to develop a deep sea port there that would provide easy access to the Bay of Bengal, military officials said.

“The worry is not Bangladesh’s military capabilities,” said former Indian ambassador to Dhaka, Pinaki Chakravarty. “It is about Chinese influence next door.”