In August, MSF launched an emergency intervention in Bandarban district in the Chittagong Hill Tracts – an area where malaria is endemic – to support the operations run in local clinics and hospitals by the Ministry of Health, and to help reach those communities living in the hardest to access villages. 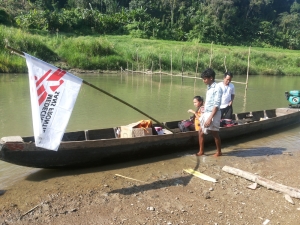 Health workers often travelled long distances in tiny boats and walked for hours through forests and up hills and crossed narrow wooden bridges in order to reach the people in need of assistance.

“My three-year-old daughter could not eat. She was too sick. Village health workers tested her blood and then provided her with malaria drugs. These services gave us a feeling of relief and safety”, explained the mother of a patient treated by MSF in the small village of Khaiwai Para.

“We feel happy now that we are getting good care.”

In the last five years the Bangladesh authorities have made progress in fulfilling their objective to eliminate malaria across the country by 2020, managing to notably reduce the number of cases nationwide. However, the mosquito-borne infectious disease has remained a challenge in the Chittagong Hill Tracts.

On the border with Myanmar, the tracts are essentially the only hilly area in Bangladesh, predominantly a very flat country lying on the enormous delta of the Ganges River.

MSF aid worker crossing an old wooden hanging bridge which connects the numerous villages of Thanchi bazaar (township) in Bandarban region, in the South East of Bangladesh. MSF team provides malaria treatment there. MSF has been working in Bangladesh since 1985 and has responded to several emergencies in the country, particularly in the Chittagong Hill Tracts. During its malaria intervention in the Bandarban district, MSF has been working along with other national and international organisations such as UNDP, BRAC or GRAUS, as well as with the Ministry of Health.

MSF provides free malaria testing to the local population in the tracts. Around 26% (1,693) of the 6,470 people screened and tested so far have been diagnosed with malaria and have received treatment. Severe cases are normally referred to nearby hospitals.

The disease can cause high fever, fatigue, headaches and vomiting; the most acute cases can lead to coma or even death if left untreated or are not treated early enough.

MSF has been providing drugs and coordination support in the major towns, but teams have also been sent to remote areas of Bandarban district where there is insufficient medical care. The village health workers integrating these teams have been trained by MSF nurses and doctors in order to be able to further develop the malaria activities.

“The cooperation between the Ministry of Health and other healthcare organisations has resulted in access to malaria diagnosis and treatment being provided quickly to the population of Bandarban,” says Parthesarathy Rajendran, Head of Mission of MSF in Bangladesh.

“MSF stands always ready to cooperate with the local authorities to provide healthcare wherever the needs are.”

MSF has been working in Bangladesh since 1985 and has responded to several emergencies in the country, particularly in the Chittagong Hill Tracts. During its malaria intervention in the Bandarban district, MSF has been working along with other national and international organisations such as UNDP, BRAC or GRAUS, as well as with the Ministry of Health.