The top official gave the order when Tareque, commanding officer (CO) of Rab 11, and Arif, company commander of the elite force unit, met him at the Rab headquarters two days after a Rab team led by Arif had killed Narayanganj City Corporation panel mayor Nazrul Islam and six others, reports the Daily Star.

They, however, did not execute the order as the situation in Narayanganj had already heated up following the abduction, sources said quoting from the confessional statement of Arif Hossain. 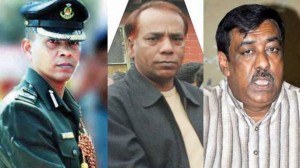 In his statement given before a Narayanganj magistrate on June 4, Major Arif, who along with Tareque was sacked from the army following the gruesome murders, also said the top Rab official was aware of the abduction and killings, the sources added.

Nazrul and his four associates and senior lawyer Chandan Sarker and his driver were kidnapped from the Dhaka-Narayanganj Link Road around the same time in broad daylight.

In the confessional statement, Arif also narrated how Rab teams led by himself and Lt Commander SM Masud Rana, who was later sacked from Bangladesh Navy, abducted the seven on April 27, killed them and dumped the bodies at the confluence of the Meghna river in the early hours of the following day.

Nur Hossain, now in an Indian jail, provided the officers necessary information and ensured that there was no public gathering at Kanchpur Ghat area on that night so that the Rab members could dump the bodies in the river without being seen.

Six bodies, including those of Nazrul and Chandan, were found afloat in the Shitalakkhya river on April 30 and the other was found a day later.

According to the sources, when Arif was returning after dumping the bodies, the top official from the Rab headquarters kept calling him on his phone. But he didn’t receive the phone. Instead, he called his CO Tareque and asked why the top official, who will be termed “Sir” hereafter, was calling him.

Tareque said he would inform him after contacting “Sir”. Later, Tareque called him to say that “Sir” had asked Arif and his team members to visit his office.

In the early hours that day, Arif with his team reached the office. Seeing him, “Sir” said, “What happened? Where is Nazrul?”

Arif was surprised to hear this because he knew that “Sir” was informed of everything.

When “Sir” repeated the question, Arif told him that he had not done anything without the CO’s orders and asked “Sir” to contact Tareque if he wanted to know anything about this.

“Sir” then called Tareque and handed the phone over to Arif, who asked his CO why the top official was asking about Nazrul’s whereabouts. Tareque replied he too did not understand why “Sir” was doing so.

On April 29, Arif and Tareque again met “Sir” on the latter’s orders. During the meeting, “Sir” asked Arif what conversation he had with Nur Hossain, for how long Nur had been giving information about Nazrul, what bank-related talks Arif had with Nur and what had been done with the bodies.

Then Arif told him that Nur Hossain had been giving information about Nazrul for one and a half months, he had asked Nur Hossain to give the [bank] account number of “a trusted person” and the bodies had been dumped in the Meghna.

Then “Sir” said, “Nur Hossain must be killed within today.”

Arif, however, said Narayanganj had already heated up centring on “the Nazrul issue” and killing Nur Hossain would turn the situation out of control, sources quoted Arif as saying.

In the afternoon that day, they came to know that they had been closed to the Rab headquarters and were later sent back to their mother forces.

Arif said Tareque had assigned him for the Nazrul job during an officers’ conference in March, and ordered Narayanganj camp commander Rana to assist him.

After several failed attempts to catch Nazrul, Arif started using Nur Hossain as the source. In the morning of April 27, Nur informed him that Nazrul was at Narayanganj court to appear in a case.

When informed, the CO ordered Arif and Rana to launch a drive to nab Nazrul.

The duo with their teams waited around the court. Around 1:00pm, Nazrul along with his aides came out of the court premises in a white car and drove off towards the Sign Board area. Already deployed by Rana, a Rab patrol team stopped Nazrul’s car around 1:30pm near the City Corporation Gate.

Nazrul and his four associates were then dragged into Arif’s microbus. Right then a black car arrived there. “A gentleman” [Chandan] came out of the car and kept shouting. Rana then picked the man and his driver into his micro bus, said the sources.

They drove towards Narsingdi and stopped at Tarabo. Minutes later Rana’s microbus reached there, but Rana had already got off at Chittagong Road’s Shimroil.

Arif then called his CO and told him that Nazrul and six others had been picked up. He sought directions for the next course of action. In response, Tareque asked Arif to kill all seven, saying, “There should be no eyewitnesses”.

Then, Arif asked one Belal of his camp to prepare seven packets of bricks and drove off towards Narsingdi camp.

Around 8:00pm on April 27, Arif informed Tareque that they were preparing to return to Narayanganj. But the CO said police were on high alert on the roads.

However, they started for Narayanganj and bought anaesthetics and a syringe on the way.

On reaching Kanchpur, he again called the CO and requested him to ask Rana to send an engine boat to Kanchpur BIWTA Ghat. Arif also asked Nur Hossain over the phone to make sure that there was no public gathering under Kanchpur bridge.

Finally before committing the coldblooded murders, Arif informed Tareq that his team was ready to kill and dump the seven. The CO replied, “Ok, go ahead,” the sources quoted Arif as saying in the statement.

Eight members of the team, including Sub-inspector Purnendu Bala, Sainik Alim, Sainik Tajul, Constable Shihab, Nayek Belal, Sepoy Taiyab and Nayek Hira, injected Nazrul and six others with the anaesthetics and then smothered them to death by covering their faces with plastic bags.

The bodies were loaded on the trawler waiting there around 1:00am and the Rab members steered off to the Meghna confluence from Kanchpur.

When they reached the confluence after an hour and a half, the Rab personnel tied each body with a packet of bricks and dumped those into the river. Before dumping, they cut a hole in the abdomen of each of the bodies.