Violating the law and driven by the motive for making quick money, traders and farmers are using excessive harmful drugs to fatten cattle for the Eid market, posing a serious threat to public  health, experts said.

Terming such process of fattening cattle ‘unethical’, veterinary experts said the process had enormous health impact on cattle and it could kill the cattle as well, reports the New Age.

Cattle traders with the help of veterinary quacks and dishonest livestock officers are using ‘cheap’ steroidal drugs like Oradexon, Decason, Dexamithson, Streron and Presdnisolon, they said. 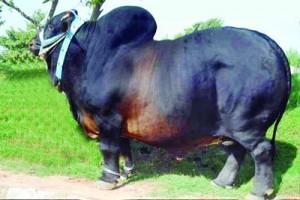 Use of steroids and harmful drugs for fattening cattle was prohibited by the Fisheries and livestock Act-2010.

Ignoring the law, farmers and cattle traders in many districts are using such drugs to make extra profit during the Eid-ul-Azha, when millions of cattle are sacrificed by the Muslims in the country, said Livestock Department officials.

A recent study conducted by Bangladesh Agricultural University said that most of the cattle brought for sale as sacrificial animals in the northern districts were fattened in this way by unscrupulous cattle traders ignoring the scientific method prescribed by Livestock Department.

Among the farmers, 70.6 per cent use anabolic steroid as a growth hormone, said the study.

Abdus Sobhan, executive secretary of Poribesh Bachao Andolon, said about 20 per cent of the sacrificial animals every year were fattened in this way.

With the Eid-ul-Azha nearing, traders have already brought thousands of cattle to markets at Hajirhat, Bonpara, Dhanuahata, Tebunia and Arunkhula in Pabna, New Age correspondent reported.

According to Livestock Department’s statistics the number cattle slaughtered as sacrificial animals on the occasion of Eid-ul-Azha has almost doubled in last five years.

Institute of Epidemiology, Disease Control and Research director Mahmudur Rahman point out that an excessive and irrational use of steroid could lead to many health problems, including arthritis, kidney and liver complications.

Such steroidal drugs are usually prescribed by doctors for serious patients, said Khursheed Jahan, a physician who also teaches at the Institute and Nutrition and Food Science at Dhaka University.

‘The steroid is entering into our food chain as it is being used in fattening cattle,’ she said, adding that consumption of steroid-treated beef would certainly cause health hazards.

Pravat Chandra Barua, also former professor of Community Medicine at Chittagong Medical College, told New Age that steroid was a life-saving drug but it was also harmful to human health at irrational uses.

‘Use of steroidal drugs in animals without prescription by veterinarians is totally unethical,’ said Pravat, also a former director at the directorate of health services.

Meanwhile, Sher-e-Bangla Agriculture University dean at the faculty of animal husbandry and veterinary medicine Anwarul Haque Beg told New Age that the cattle fattened by drugs could die if not slaughtered within a certain period of time.

Such cattle get weaker and start losing their general physical ability though they get fat after being treated with steroid, he said.

Bangladesh Agricultural University animal science professor MA Hashem said that an excessive use of medicines like Dexamethasone, Decason, Betamethasone and Paractin damages the kidneys and intestines of cattle.

‘It affects discharge of water from their body and the accumulated water gets absorbed into the flesh of the cow rendering it bulky,’ he said.

He, however, said that common people could check some telltale signs of steroid- and hormone-treated cattle.

He said that these cows look quiet due to illness.

The experts also accused the livestock authorities and the government of being indifferent to the serious health issue.

M Ali Noor, joint secretary (livestock) of ministry of fisheries and livestock, said they had ordered their upazila-level officials to monitor the matter.

‘We will examine ‘suspicious’ cattle at the haats in the country. If any cattle are found to be unusually healthy, we will take stern action against the traders,’ he said.