A meeting of newly formed Board of Directors of Islami Bank Bangladesh Limited (IBBL) was held on Saturday, May 31, 2014 at the Board Room of Islami Bank Tower. 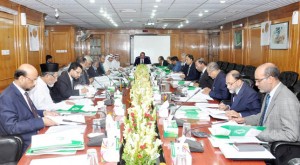 Prof. Abu Nasser Muhammad Abduz Zaher, who was re-elected Chairman of the Bank presided over the meeting.