Neymar scored his sixth goal in seven days to cap Barcelona’s 3-0 win over Cartagena on Tuesday as it advanced in the Copa del Rey on a 7-1 aggregate score.
With the round-of-32 matchup practically decided after Barcelona’s 4-1 victory in the first leg, the match lacked pace at the start and Cartagena’s Diego Segura almost snatched a goal for the third-division side when he curled a free kick off the upright in the 28th minute.
But three minutes later Pedro Rodriguez scored his third goal of the series before Cristian Tello’s deflected shot sneaked inside the post in the 68th. 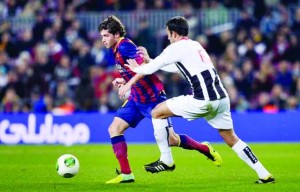 Neymar rose over his marker to head home Andres Iniesta’s cross in the 88th and record his first goal in the competition. The Brazil striker scored a hat trick against Celtic last week and he netted twice against Villarreal over the weekend.
Barcelona captain Carles Puyol played his first game at Camp Nou in nine months after being sidelined by injuries.
“It’s always important to play well at home and we made sure to finish off the tie,” Pedro said.
Barcelona will next face Getafe after it brushed aside second-division Girona 4-1 to go through 5-2 on aggregate.
Barcelona first travels to Madrid to play Getafe on Sunday in the Spanish league before they meet twice more in the cup in January.

Getafe cruised to the win at home on goals by Pablo Sarabia, Adrian Colunga, Angel Lafita and Lisandro Lopez.
Alcorcon, the minnow that shocked Real Madrid 4-0 in 2009, fought back on the road to erase a 2-0 first-leg loss to Granada before bettering the topflight side on penalties.
The second-division team forced extra time after goals by defenders Hector Verdes in the 42nd and Alberto Gomez in the 83rd to level the aggregate score at 2-2.
Alcorcon showed more mettle in the shootout that went to a sixth round before Granada center back Jeison Murillo launched his spot kick over the bar.
Also, Osasuna eliminated Malaga on away goals after a 1-1 draw, earning the Pamplona-based side a possible meeting with Madrid in the round of 16.
Osasuna, which had rallied from a three-goal deficit to draw 3-3 in the first leg, went ahead through Malaga defender Weligton’s own goal seconds into the match. Malaga forward Eliseu Pereira leveled with a long strike in the 61st, but Bernd Schuster’s team fell one goal short.

“The first goal was a shame,” said Schuster. “We had conceded before we even touched the ball.”
Madrid hosts third-division Xativa Olimpic on Wednesday after being held to a 0-0 draw in their first game.
Villarreal forward Jeremy Perbet curled the ball in off the post in the 58th to claim a 1-0 win at Elche, sending his team through 3-2 on aggregate.
Levante routed Recreativo Huelva 4-0 at home to easily overturn its 1-0 first-leg loss.
Simao Mate headed in Levante’s first goal four minutes in, with Ruben Garcia, Andreas Ivanschitz and David Barral following suit against the second-division opponent.