Model and actor Nirob has been signed for a film named “Bhola to Jay Na Tare” (I can’t forget him/her). Tanha will be working as his co-star in the film. This will be their first film together. 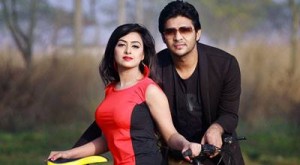 Rafique Sikdar will be directing the film.

The storyline is based on two Hindu-Muslim families. Nirob will play the character of Rudra and NIlanjana will be played by Tanha.
Nirob is very optimistic about the movie.

“It has a good story line. People will like it.”–Nirob