A warm reception was organized and hosted by Ambassador of Norway Merete Lundemo in honour of Selima Ahmad winner of the 2014 Oslo Business for Peace Award, at the Norwegian Residence in the capital on Thursday. The reception preceded by a press conference where Ms. Selima Ahmad, President of Bangladesh Women Chamber of Commerce and Industry (BWCCI), H.E. Ms. Merete Lundemo, Ambassador of Norway and Ms. Sangita Ahmed, Immediate Past President of BWCCI were present. 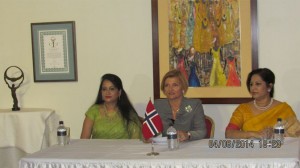 Giving her speech, Merete Lundemo said that Selima Ahmad is among the honourees of the Business for Peace Foundation in 2014 which is regarded as nobel prize for business. On 15 May, she was conferred the Business for Peace Award at a summit in Oslo City Hall. She said that Selima through her business and mission has set examples of business worthiness; she is an agent for modern business, for meaningful and responsible business practices, for the kind of business that will grow and stimulate development. She congratulated Ahmad on achieving such well-merited award.

Thanking the Ambassador for the warm reception Ms. Selima Ahmad said in her speech that private sector in Bangladesh has been very vibrant and playing an important role in developing country’s economy. But time has come, she said, that private sector plays a stronger role in establishing peace in the society and add value to the community. She mentioned that the award and honour she received is not only hers but of all Bangladeshi women entrepreneurs. She said, she is happy that through her such honour has been brought to the country and her responsibility has become greater than before. She added that she would continue her work with renewed vigour to ensure that woman entrepreneurs play more significant role in Bangladesh’s economy.

Sangita Ahmed said that it is a matter of great pride and inspiration for Bangladesh Women Chamber of Commerce & Industry and all the entrepreneurs of Bangladesh that Selima Ahmad has won the Oslo Business for Peace Award this year and has taken her place among top global entrepreneurs. She said that being business worthy is to apply one’s business energy ethically and responsibly with the purpose of creating economic value, as well as value for society and Selima Ahmad is a business leader who has fostered peace and stability by creating shared values between business and society. The commitment and dedication Selima has shown throughout her life to develop women entrepreneurs is example for all she said. The reception was attended by ambassadors and diplomats of different countries, president of Bangladesh Mohila Parishad Ms. Ayesha Khanam, country director of Action Aid Bangladesh Ms. Farah Kabir, renowned business woman and advisor to former caretaker govt Geeteara Safia Choudhury, renowned economist Dr. Debapriya Bhattachariya, chairman of Sonali Bank Limited Mr. habibur Rahman, advisor to former caretaker govt. Rehman Sobhan, former Bangladesh bank governor Salehuddin Ahmed, chairman of Nitol-Niloy Group Abdul Matlub Ahmad, country manager of the Asia Foundation Hasan Mazumder media representatives and others.