US President Barack Obama told the people and leaders of Iran on Thursday that nuclear talks presented “the best opportunity in decades” for the two countries to transform long-frayed ties, but warned there was still work to do in the tortuous negotiations. 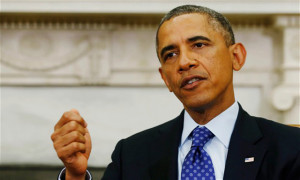 It came after mixed messages emerged from the talks earlier in the day in Switzerland, where US Secretary of State John Kerry and his Iranian counterpart hailed “progress,” but a European negotiator said Tehran and the six major powers were “pretty far from a deal.”

The countdown has begun with a March 31 deadline to agree to the outlines of an agreement that would see Iran scale back its nuclear program in return for relief from sanctions.

In his annual address to mark the Persian new year festival of Nowruz, Obama—in a video message—spoke directly to the Iranian people and their leaders.

“This year, we have the best opportunity in decades to pursue a different future between our countries,” the president said.

He did not give names, but Obama’s Republican foes, allies Israel and Gulf countries—as well as hawks in Tehran—have all voiced opposition to an agreement.

“The days and weeks ahead will be critical. Our negotiations have made progress, but gaps remain,” he said.

“And there are people, in both our countries and beyond, who oppose a diplomatic resolution.

“My message to you—the people of Iran—is that together we have to speak up for the future we seek.”

Obama’s video was subtitled in Farsi and included a direct appeal to Iran’s large and youthful population, many of whom have known only antagonism between the United States and Iran.

The 1979 Iranian revolution and subsequent capture of US embassy hostages in Tehran led to a rupture in diplomatic relations that is only now starting to be repaired, and Obama acknowledged that: “For decades, our nations have been separated by mistrust and fear.”

But he added: “I believe that our nations have an historic opportunity to resolve this issue peacefully—an opportunity we should not miss.”

The mooted agreement, due to be finalized by July, is aimed at convincing the world after a standoff now in its 13th year that Iran won’t build nuclear weapons under the guise of its civilian program.

In exchange Iran would be granted staggered relief from the mountain of painful sanctions that have strangled its oil exports and hammered its economy.

Speaking in the Swiss city of Lausanne, where the talks are taking place, the European diplomat said he did not expect a breakthrough by Friday, the tentative scheduled end of this round of meetings, meaning that negotiators will likely have to return next week.

Negotiators missed two deadlines last July and November to clinch a deal despite numerous rounds of talks around the world.

The Republicans and Israel’s freshly re-elected Prime Minister Benjamin Netanyahu—whose country is widely assumed to have nukes itself—fear the agreement will not stop Iran from getting the bomb.

Obama’s administration has repeatedly warned that congressional action at the height of negotiations could infuriate Iran and provide it with an excuse to pull out of talks.