The ‘Olympic Solidarity Table Tennis Course for Coaches (Level-2)’ kicked off  Tuesday at Shahid Tazuddin Indoor Stadium in the city. 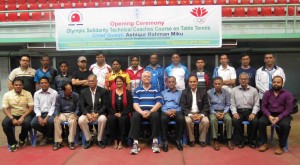 Khondoker Hasan Munir, Member Secretary of Olympic Solidarity Committee was the special guest at the event. Abdul Karim, President of the Federation presided over the opening ceremony, says a press release.

The course will be continued till December 8.

A total of 16 members (Level-1 coaches) from Bangladesh are participating in the course.