The Annual Conference’ 2014 of Peoples Insurance Company Limited has been held recently at Hotel Purbani International in the capital. 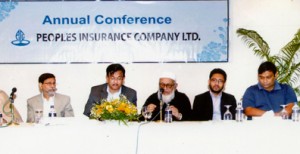