Speaking at a programme arranged by UNDP in Bangladesh, he hoped that the young people will take a stand against these practices. 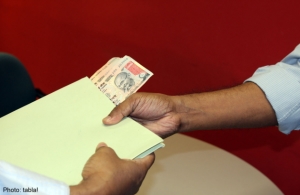 UNDP organised the event to mark the International Anti-Corruption Day 2014. Around 200 young people participated in the interactive programme held at the Russian Cultural Centre.

The slogan for the Anti-Corruption Day this year was “Break the corruption chain”.

Nick Beresford, deputy country director of UNDP in Bangladesh, was present at the event as the chief guest. Dr Nasiruddin Ahmed, commissioner of Anti-Corruption Commission and Dr Iftekharuzzaman were special guests.

Speaking about the impact of corruption on society, Beresford said fighting corruption is a global concern because corruption is found in both rich and poor countries, and evidence shows that it hurts poor people disproportionately.

He added that corruption also leads to creating unemployment and the young people suffer badly as a consequence.

Commissioner Dr Ahmed said that although the Anti Corruption Commission in Bangladesh was only established 10 years ago, it has achieved significant success in establishing a systematic procedure of taking action against corruption at every level of governance.

After the speeches, the young volunteers participated in a lively question-answer session with the panel of guests.