The countries of South Asia need to stand together in their efforts to push for more finance from the developed world to help them adapt to and mitigate the impacts of climate change,  a prominent regional expert says.

Saleemul Huq, from Bangladesh, a lead negotiator for the group of Least Developed Countries told a fringe meeting at the UN climate change conference in Lima, Peru, that South Asia countries face a range of climate-related events.

“Countries in the region must co-ordinate climate action to cope with adverse climate impacts, such as flash floods, forest fires, cyclones, migration and sea-level rise.” said Huq, senior fellow in the Climate Change Group at the International Institute for Environment and Development. 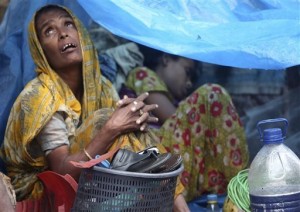 The South Asia region is home to more than one-fifth of the globe’s population, but is also regarded as one of the most disaster-prone regions in the world, Huq told delegates.

Countries in the region must co-ordinate climate action to cope with adverse climate impacts, such as flash floods, forest fires, cyclones, migration and sea-level rise

Temperature projections for the region for the 21st century indicate a substantial rise in warming, with recent modelling showing that the warming would be particularly significant in the high Himalayas, on the Tibetan Plateau, and across arid regions of Asia.

“Extreme weather events are also forecast across the region” said Huq. “This is likely to include an increase in the interannual variability of precipitation during the Asian summer monsoon period.”

In turn, Huq said, this will negatively impact on crop yields throughout the region, as already crops in many areas are already being grown at close to their temperature tolerance threshold.

In its latest assessment, the UN’s Intergovernmental Panel on Climate Change identified the South Asia region as one of the areas most vulnerable to warming.

In the high Himalayas and on the Tibetan Plateau, rates of glacial melting are increasing. The incidence of flooding is likely to grow, although there is the possibility, over the long term, of drought affecting billions of people in one of the most densely-populated areas on Earth.

Co-operation between the region’s countries on climate change is minimal. Pakistan and India, for example, remain deeply suspicious of each other, and data on such key issues as river flows and erosion rates are classified as state secrets.

China and India are competing for water resources, and large-scale dam building programmes in both countries are creating environmental tensions in the region.

Less powerful countries in the area – such as Bangladesh and Nepal – are squeezed between the competing interests of their powerful neighbours.

Harjeet Singh, a New Delhi-based representative of the Action Aid charity, told delegates that South Asian countries must use their combined influence to pressure world leaders to reach a legally-binding climate agreement in 2015.

Singh told the Climate News Network that a new agreement was a matter of urgency, and  that developed countries must also fulfill their commitments to help developing countries with adaptation measures.

Manjeet Dhakal, a director of the Clean Energy Nepal research organisation, said a new agreement must address the needs of the vulnerable. “The regional countries and other developing states,” he said, “have to have technical support in order to hammer out their climate adaptation plans. They also need the financial support to put those plans into action.”