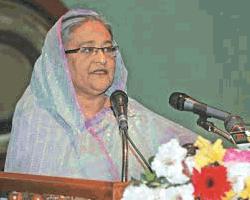 Prime Minister Sheikh Hasina today put emphasis on having proper knowledge about the defence and the national security by the civil administration.

“So, having proper knowledge about the defence and the national security by the civil administration is indispensable besides the members of the defence forces,” she added.

The Prime Minister expressed this view while addressing the 15th joint meeting of the governing bodies of the National Defence College (NDC) and the Defence Services Command and Staff College (DSCSC) at the Armed Forces Division at Dhaka Cantonment here this morning.

The Prime Minister asked the members of the governing bodies of the NDC and the DSCSC to strive to make the two institutions more time-befitting.

She said the NDC and DSCSC, the country’s two reputed educational institutions, have already got well-recognition at home and abroad through providing quality and time-befitting education.

“The contribution of the two institutions to achieve professionalism and efficiency of the Bangladesh Armed Forces is endless,” she said.

Sheikh Hasina said she became happy to know that the officers of the armed forces of 37 friendly countries have so far taken training from the two organizations. “These officers were later appointed to the important posts in their respective countries,” she said

Through this, she said, the two institutions have been playing an important role in projecting Bangladesh internationally side by side with further strengthening the country’s relations with the outside of the world.

The Prime Minister expressed the hope that the success of the two institutions would continue and they would make contribution to enhance the professional efficiency of the armed forces through giving better training.

She said the National Defence College has been performing its responsibility with utmost efficiency to provide training to the members of the defence forces and civil administration.

“A positive impact of this type of training is already being witnessed in the defence forces and civil administration,” she said.

Sheikh Hasina extended her sincere thanks and expressed gratitude to all including commandants, trainers, officials and employees who have been contributing since the establishments of the NDC and the DSCSC.

“It is my firm belief that the both institutions would move forward towards further development with the united efforts and guidelines of all,” she said.

The Prime Minister said she is also happy to know that the administration of these institutions has been able to earn significant success by accomplishing the responsibilities entrusted upon them smoothly through proper and optimum use of their resources, training tools, facilities and the allotted budget.

Illustrating her government’s steps for the development of the two institutions, she said her previous government immediately after taking office had undertaken a project to expand the infrastructure facilities to meet training and housing demand.

Sheikh Hasina also mentioned that the construction work of multistoried officers residential building for the DSCSC has been finished, while a multistoried academic building is being built.

“I am hopeful that the overall quality of the two institutions would be further increased through infrastructural expansion,” she said.