Former president of Bangladesh Garment Manufacturer and Exporters Association (BGMEA) Shafiul islam Mohiuddin said, the export growth of the RMG products decreased by 10 per cent in recent months while the export growth in India, Cambodia and Vietnam rose to 30 per cent.

These countries were far behind in the field of exporting apparels until last few years, but united efforts and business friendly environment have helped them supercede Bangladesh, he said.

In tune with the former BGMEA president, country’s economist and business leaders fear that the current growth of economy might also be hit if political unrest continues few more days. 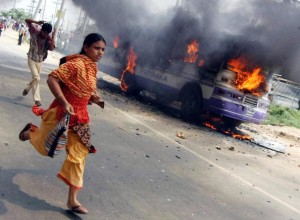 Talking with bdreports24.com at Wednesday evening, they said, garment sector had already been affected by the nation wide blockade programme. For example, 3,140 containers with export cargoes were stuck up at private container depots for Chittagong.

President of Federation of Chamber of Commerce and Industries (FBCCI) Kazi Akram Uddin Ahmed said, the political parties should work together despite differences in their manifestoes to save the economy and the huge investment in all the export oriented sectors.

But Planning Commission Member Dr Shamsul Alam differed with the business leaders and said that the overall economic growth would not be affected by the opposition’s hartals and blockades.

However, AB Mirza Azizul Islam, a former adviser to the caretaker government said, “Some economists whimsically say that growth could not be downsized due to the political turmoil. This is not true. Surely political unrest hits economy.

The former caretaker government adviser said, “A major section of the country’s manufacturing sector, especially the garment factories, rely heavily on imported raw materials. But they are now hit heavily by delays in shipment at the Chittagong port because of hartals and blockade.”

Readymade garments export had also declined because of the recent 71-hour blockade, which might result in a sharp slide in buyer confidence as well, Mirza added.

Khondaker Golam Moazzem, Additional Director (Research) of Centre for Policy Dialogue said, “Despite political unrest, the government towards the end of its tenure wants to reject the argument and fact.”

He suggested that the government must learn to accept and consider the ‘different’ ideas that came up in the Fiscal Coordination Council’s meeting, only for its own good.

The World Bank, International Monetary Fund and Asian Development Bank have also expressed concern that the continuous street agitation centering the national election would take a heavy toll on Bangladesh’s economy and its growth.

They have estimated that the country’s GDP growth rate would remain under 6 per cent during the ongoing fiscal, although the finance ministry expects it to grow to 6.6 per cent.  The government has a budgetary target of achieving 7.2 per cent GDP growth in the current fiscal year.