Imagine a forest that is not really a forest, but a multi-layered garden reaching up more than 10 meters. It produces more than 25 times as much income as the rice it usually replaces and forms a ‘canopy’ that provides a home for endangered plants and animals.

No. Such three-dimensional agroforestry farms already exist. And in Bangladesh, which has already lost more than 90 percent of its forests, these farms may offer a chance to buy time for what forest is left.

What if the same land could grow more food, and at the same time create something that at least vaguely resembles a forest? 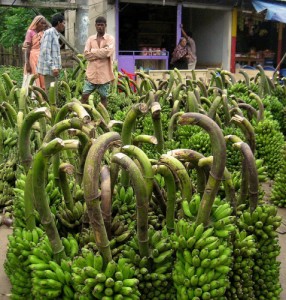 Perhaps some alternatives to deforestation lie in thinking ‘up’ — vertically up.

Bangladesh has more than 150 million people. They need food. The country is seriously threatened by climate change. If sea levels rise in the coming decades as scientists predict, huge swathes of the Ganges delta will be among the first in the world to be drowned by seawater.

But here in the Chittagong Hill Tracts there is another problem. In 1800 this eastern area of the country was covered in dense vegetation. Now nearly all the trees are gone. With them have gone medicinal plants, forest vegetables and herbs which the local tribal people depended on.

Over time, loss of forest has damaged the ground. Soil quality has dropped. Crop yields are down. Malnutrition is widespread. Land belongs to the government, including the intact forests. Farmers only have rights to use it. Despite that, the speed of destruction has been fast.

The UN Food and Agriculture Organization (FAO) has found that natural forest in this area dropped by more than a third between 1990 and 2005, from around 26,000 hectares to a little more than 16,000 hectares.

What if the same land could grow more food, and at the same time create something that at least vaguely resembles a forest? Sure, it will not be a virgin forest, but overall Bangladesh will have more trees. What if it was vastly more productive?

That is what agroforestry is about. At the Center for International Forestry Research (CIFOR), we are suggesting that some of the answers could be found by using space in all three dimensions.

For the farmers of the Alutilla Valley, where our research was carried out, combining farming and forestry is not new. They have always managed parts of their forests in a ‘semi-agricultural’ way. However, we identified a ‘multi-story’ model which appears vastly more profitable.