Speculation of poor crops for unfavourable weather and resumption of exports have fuelled potato prices, raising farmers’ hopes of recouping the losses incurred for selling vegetables at throwaway prices early this year owing to political unrest. 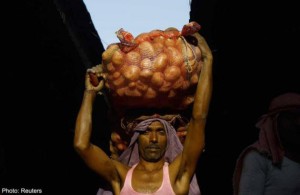 Farmers now get up to Tk 10 (S$0.2) per kilogram for one of the popular varieties of potato, Diamant, up from Tk 8 for the same variety early this month, said Rahidul Islam, a vegetable stockist and wholesaler at Mahasthan Bazar, one of the main wholesale vegetable depots up north.

In Dhaka, the prices of potato also rose, albeit slightly. Retailers yesterday sold each kilogram at Tk 12-16, up 3.7 per cent from the previous week, according to Trading Corporation of Bangladesh.

It seems the production will fall short from last year, said Islam, who has already stored 170 tonnes of potato by purchasing the vegetable at above Tk 10 each kilogram.

Prices have started spiralling fast this week, as traders have become active in buying potato from farmers, he added.

Babu Sarker, a small farmer at Bogra, said the potato price spike allowed him to narrow down the losses he had incurred for selling vegetables at very low prices in the wake of continued blockades and shutdowns.

“The price spiral has reduced the burden of losses,” said Babu, one of the hundreds of growers that took a massive financial hit for the political turmoil since January 6.

Growers planted potato on 4.76 lakh hectares of land in the immediate harvesting season, according to the Department of Agricultural Extension.

The DAE earlier aimed to ensure production of 87.89 lakh tonnes of potato this season, with its Director General AZM Momtajul Karim saying that production was good this season.

In fiscal 2013-14, farmers bagged 89.50 lakh tonnes of potato, up 4 per cent year-on-year, according to Bangladesh Bureau of Statistics.

Exporters have already shipped 16,500 tonnes of potato since the beginning of the harvesting season, said Anwar Faruque, director general of the agriculture ministry’s seed wing.

Disease attacks and risk of deterioration of quality for rainfall during the last one month and early this month in various growing districts have fuelled worries of production decline, according to some potato traders and farmers.

Traders are very active in purchasing potato on speculation of reduced output, said Nasir Uddin Liton, a farmer in Rangpur, a northwest division.

He said the current prices of potato are higher than the prices at the same time last year.

“My fellows are making profit at the current prices, but I am not.

Pest attacks have affected potato yields in my field.”

Liton sold all his produce on the field at Tk 10 each kilogram on March 13, which was higher than his production cost. However, the BCSA president said the price spiral might be temporary.

He said cold storage owners have extended credit to traders to purchase potato and store in warehouses, as a result of which prices have increased.

But farmers are least interested in storing potatoes in cold stores; they are likely to preserve potato at their homes following traditional means, he added.