A project bringing together children from Port Talbot and Bangladesh has been praised by the British High Commissioner for the country — who also comes from the town.

Robert Gibson CMG was brought up in Margam, but has since lived all over the world, and has been at the British High Commission in Dhaka since 2011.

While in St David’s Church, Margam, at Christmas, he heard that British Council grant funded project, Connecting Classrooms, had reached the town, and set about to visit the schools involved. 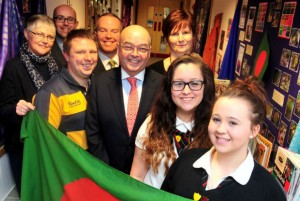 Four schools in the area are currently signed up to the project — Sandfields Comprehensive, Coed Hirwaun Primary and Pontrhydyfen Primary, along with Eastern Primary — and now more are hoping to secure funding.

Mr Gibson, who visited Coed Hirwaun yesterday, said the project benefited children both in Bangladesh and here in Wales.

“Children here will realise there are other lifestyles where people are not as fortunate elsewhere in the world as they are here in Wales,” he said.

Two pupils from Sandfields got a chance to go on a trip of a lifetime to the country with teachers last year, an experience Mr Gibson said would have been life changing.

Cherie Davies and Samantha King — both year 11 pupils at the school — also visited the school to speak to the Commissioner.

They said it was interesting to hear him talk about the country they had visited.

Mr Gibson said when he returns to Bangladesh, he will visit the schools in Rangpur which are part of the project.

Coed Hirwaun headteacher, Sharon Davies, said: “I am very excited, thrilled and honoured that the commissioner has been able to visit us, and we were able to get his seal of approval to the project.”

Now those who originally signed up are hoping another five schools will be successful in an application for British Council funding for the project.

The three original schools have applied for further funding, while Eastern Primary has joined with Crynallt Primary in Cimla and Nottage Primary in Porthcawl to apply.

A third group, which includes Llangiwg Primary, Pontardawe, Clun Primary in the Neath Valley and Dwr-y-Felin Comprehensive has also applied for funding.

And the teachers with experience have set up Friends in Bangladesh to help those interested in signing up to the project on their way, by providing advice about visiting the country, setting up links and applying for funding.