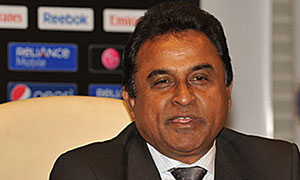 “I think it (the draft position paper) will not be passed in this meeting”, Kamal told Channel 24 prior to his departure for the ICC headquarters in Dubai, where the cricket’s ruling body will meet on Wednesday and Thursday.

In that meeting the radical proposal, which contains policies on the restructuring of the ICC board, with supreme power entrusted on ‘Big Three’ led by India, would be tabled for vote.

“This proposal contradicts the existing ICC constitution. To pass, it needs eight (out of ten full members’) votes. Papon (BCB President Nazmul Hasan) will vote in the meeting (on behalf of BCB) and, I believe, he will do whatever it takes for the greater interest of our cricket,” said Kamal, who resigned as BCB president a year ago for the ICC post.

The key aspect in the draft includes the formation of a four-member Executive Committee where India, Australia and England will have permanent representation.

It will also reserve the sole right to recommend any proposal for the ICC board to be passed; formation of F&CA with representation from the same group to recommend all financial matters of ICC; formation of Test championship involving the top eight teams by scrapping the existing FTP (Future Tour Programme); introduction of Inter-Continental Cup where the ninth and tenth Test nations will fight with other associate member nations from where the top team will challenge the eighth ranked Test side.

However, the paper said India, Australia and England will never be relegated.

The draft, if passed, would be a death knell for Bangladesh, who currently are at the bottom of the 10-team Test rankings.

The draft sparked a huge uproar in Bangladesh and other parts of the cricket world.

Yesterday, youths, through the help of the social media, formed human chains in different parts of the country, including Shahbagh, a key point in the capital.

Countrywide protests prompted BCB, which had earlier decided to vote for the draft, shift its stance.

“The draft proposal had a lot of components, one of which was that Bangladesh would not play Test cricket from 2015. We will oppose two-tier Test policy,” BCB’s media spokesman Jalal Younus said yesterday.