Through the corporate partnership, Axiata Arena is set to be the crown jewel of KL Sports City, the redevelopment of the Bukit Jalil National Sports Complex, when it reopens in July 2017. 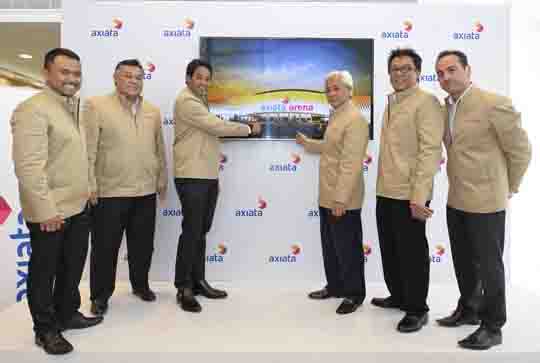 Currently undergoing extensive upgrading works, the multi-purpose indoor arena will become a fully integrated and high connectivity world-class venue for sports, entertainment and culture, on par with international destination venues such as the Staples Center in Los Angeles, the O2 Arena in London and the Mercedes Benz Arena in Shanghai.

Axiata Arena is a progression of Axiata’s commitment to nation building. In Malaysia and regionally, the Group supports sports and youth development through sponsorship of events and initiatives such as the Celcom Axiata Malaysia Open, the national cricket teams of Sri Lanka and Bangladesh and several talent development programs in Indonesia and Cambodia.

Commenting on the partnership, Tan Sri Jamaludin Ibrahim, President & Group Chief Executive Officer of Axiata said, “We thank the Ministry of Youth and Sports as well as Perbadanan Stadium Malaysia for this opportunity. It is a tremendous honour to be the first company to have an iconic Malaysian arena named after us.

The sponsorship will facilitate the implementation of new services and innovative technology capabilities to make Axiata Arena Malaysia’s first digitalised arena. The enhanced indoor and outdoor connectivity build-up will allow all digital features to work seamlessly; its own interactive app, facial recognition technology, digital LED scoreboards, signages and advertising boards, as well as interactive games and entertainment, especially from Celcom.

Axiata Arena aims to build a reputation for world-class amenities, facilities and features, as well as a commitment to guest experience that will be second to none. Upgraded facilities will include increased seating capacity, corporate suites, cutting edge sound systems, refreshed lobby and locker rooms, aside from a slew of digital features.

With a new capacity of over 14,425 seats and a maximum field size of 69 X 25 meters, Axiata Arena will have the highest seating capacity of any indoor venue in Malaysia. Seating arrangement and ground surface can be modified for a variety of events including indoor sports such as badminton, gymnastics, martial arts, concerts, conferences and exhibitions.

Axiata Arena will be a key venue for the 29th South East Asian Games and the 9th ASEAN Para Games that will be held in Kuala Lumpur in August 2017 with international music artists already in the pipeline to hold concerts from the fourth quarter this year, along with family friendly events such as Disney On Ice.

As one of the largest Asian telecommunication companies, Axiata today operates in ten countries, servicing approximately 300 million subscribers. With a diverse portfolio in mobile network operations, communications infrastructure services and digital services, the Group pieces together the best in connectivity, technology and people in its vision of Advancing Asia.

Axiata has controlling stakes in market leading mobile operators in South East Asia and South Asia. Axiata Group of companies operate under the brand name of ‘Celcom’ in Malaysia, ‘XL’ in Indonesia, ‘Dialog’ in Sri Lanka, ‘Robi’ in Bangladesh, ‘Smart’ in Cambodia and ‘Ncell’ in Nepal. Further to this, the Group also holds strategic interests in ‘Idea’ in India and ‘M1’ in Singapore.

‘edotco’, the Group’s infrastructure company, operates in six countries to deliver telecommunications infrastructure services, amassing a portfolio of over 16,000 towers and 12,000 km of fibre. It aims to be one of the top regional tower companies and is committed to responsible and sustainable business operations.

As a committed and long-term investor, Axiata provides employment to 25,000 people within its operations. In line with its sustainability goals, the Group actively supports and drives young talent development; disaster response and recovery; as well as green initiatives.

Perbadanan Stadium Malaysia (PSM), formerly known as the Perbadanan Stadium Merdeka is a federal statutory body under the Ministry of Youth and Sports Malaysia. PSM was established on December 26, 1963 through the Merdeka Stadium Corporation Act No.11 of 1963 to manage and maintain the Stadium Merdeka and Stadium Negara. However, the trust given by the government, PSM has been given greater responsibility to manage and maintain the National Sports Complex in Bukit Jalil and National Sports Complex in Bukit Kiara from July 1998.

ABOUT ROBI AS THE MERGED COMPANY

Robi Axiata Limited is a joint venture between Axiata Group of Malaysia, Bharti Airtel, of India and NTT Docomo Inc., of Japan. Axiata holds 68.7% controlling stake in the entity, Bharti holds 25% while the remaining 6.3% is held by NTT Docomo of Japan. It is the second largest mobile phone operator of Bangladesh with approximately 32.2 million active subscribers. The company provides widest network coverage to 99% of the population with over 13,900 on-air sites of which over 8,000 are 3.5G sites. Robi is the first operator to introduce GPRS and 3.5G services in Bangladesh. The company has introduced many first of its kind digital services in the country and has invested heavily in taking mobile financial services to the underserved communities in the rural and semi-urban areas. Robi, as a socially responsible brand, has taken up a number of flagship Corporate Responsibility initiatives in the areas of ICT-Education, Health and Environment with a view to contribute towards the sustainable development of the country.