Outgoing US Agency for International Development Administrator Rajiv Shah, who is preparing to vacate his position early next month, might have left the agency much sooner, according to one of his former top aides — if only he had gotten the top job at the World Bank. 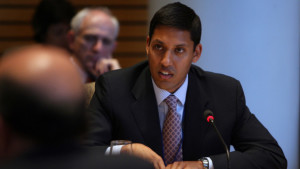 Two years into his term, Shah was under consideration for the presidency of the World Bank, according to an op-ed written by his former chief of staff.

“Astonishingly, at aged 38, Raj was among the candidates being considered for the World Bank presidency,” writes Sean Carroll, senior director at Creative Associates International, in an op-ed published on that organization’s website.

Jim Yong Kim, whom Carroll describes as “a candidate with a similar profile — young, first generation U.S. citizen and development expert,” eventually won out. Shah, according to Carroll, attributed the White House’s decision not to back him as a referendum on his management skills.

Shah, according to Carroll, was helping the White House come up with World Bank presidency candidates at the same time they were considering him for the job.

“He saw what torpedoed a few of them. One after another, he told me, the White House discarded candidates who were seen as being insufficiently good at managing ‘the building.’ … His implied message was he believed this may have hurt his chances too,” Carroll writes.

Devex reached out to Shah and his agency for comment.